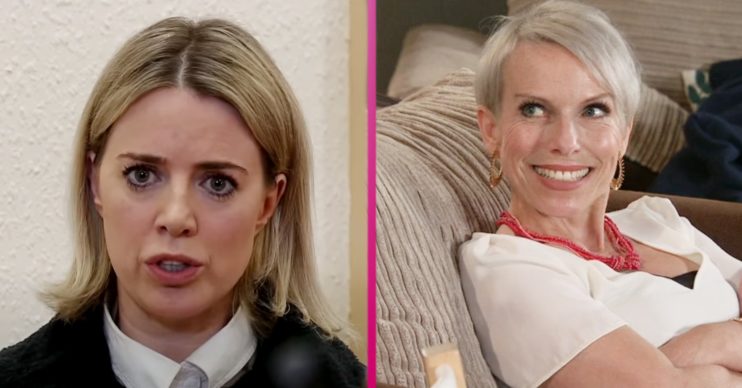 In last night’s episode of Corrie (Wednesday August 26) Debbie returned to Weatherfield to stay with Kevin, Abi and Jack.

However it was immediately clear that Abi wasn’t thrilled by Debbie’s arrival, perhaps because she’s struggling with addiction.

As Kevin popped out to get dinner for them all, Debbie warned Abi to be good to her brother Kevin.

But Abi responded saying: “Well chill your beans Annie Lennox, I have no intentions of messing him about.”

Fans were left in stitches by the comparison.

I'M TELLING YOU ANNIE LENNOX AND DEBBIE ARE THE SAME PERSON #corrie pic.twitter.com/F6TZC5XECX

This isn’t the first time viewers have seen the similarities between Debbie and Annie.

What’s next for Abi and Debbie?

This week, Abi tells Peter she will attend a meeting which helps those struggling with addiction.

However when Debbie offers to cook lunch suggesting she and Abi should get to know each other better, Abi has little choice but to accept.

But when Abi rushes off after she’s eaten Debbie is suspicious.

But as Debbie watches from a distance, her suspicions are heightened. Will Abi tell her and Kevin about her struggle with addiction?

Fans know Abi has struggled with addiction in the past. However when she moved to the cobbles she seemed to get her life on track.

But recently she relapsed after an accident at work, which saw a car engine fall on her arm.

The accident meant she missed saying goodbye to her twins, who are moving to Australia with their adopted family.

In an upset state, Abi took morphine from the hospital, but was spotted by Peter, who is determined to help her.

But will Debbie end up getting the wrong end of the stick?