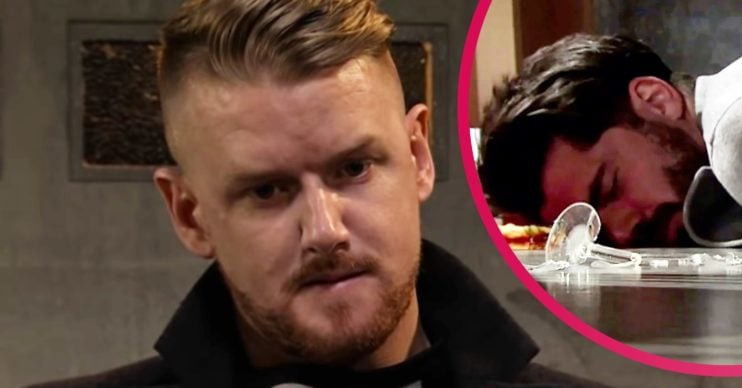 Coronation Street saw Gary Windass arrested for attacking Adam Barlow and fans of the ITV soap are in shock.

Killer Gary has claimed two lives – the accidental death of Rana Habeeb and the murder of loan shark Rick Neelan – but he is innocent of attacking Adam.

Instead he was caught trying to cover up the crime for his sister, Faye.

She attacked Adam thinking he was her rapist, Ray Crosby.

Last night, she told Gary how she still had the weapon she used in the attack. He sprang into action to dispose of it for her.

However he was caught acting suspiciously by Craig Tinker – and was soon hauled in for questioning.

And when the police got the forensics back on the weapon and saw it was Adam’s blood, he was arrested.

However, the detective told Gary: “The forensics have come back. We’ve positively identified the weapon as the object used to assault the victim.

“Mr Barlow suspected it was you and you were caught in possession of the weapon that had his blood on it. Is there anything else you’d like to say?”

As Gary refused to comment, the policeman had no option but to arrest him.

“Gary Windass,” he said. “I’m arresting you for the assault on Adam Barlow. You do not have to say anything but it may harm your defence if you do not mention something when questioned that you later rely on in court.

“Anything you do say may be given in evidence.”

Fans are in shock over the arrest, with one saying: “Don’t wanna see Gary get sent down. He’s one of my favourites #Corrie.”

In addition, a second said: “Gary has been arrested for Adam’s assault #Corrie.”

However, fans shouldn’t be too worried as Corrie boss Iain Macleod has insisted Gary is going nowhere.

“I’m in no hurry to see the back of Gary at all, really,” he told ED! and other media.

“Mikey [North, who plays Gary] is a fabulous performer, a really good actor and a thoroughly nice chap. I am enjoying watching Gary and hopefully we will continue to do so for as long as we can.”