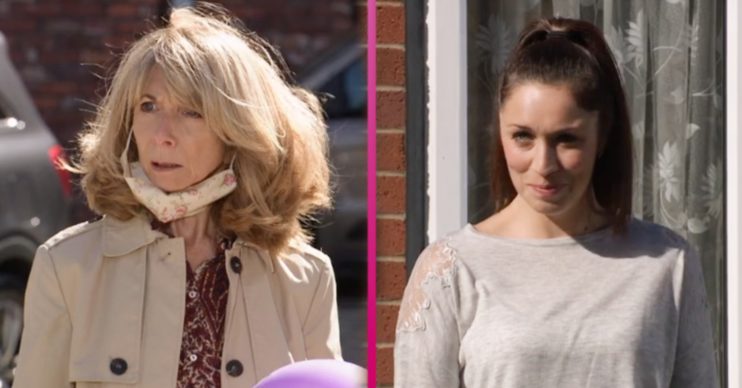 It was Audrey's 80th birthday party!

Coronation Street fans were left in hysterics as Gail was mistaken for an 80-year-old in last night’s episodes (Wednesday, October 14).

In the visit to Weatherfield, Gail, David and Sarah all planned for Audrey to have an 80th birthday party, as she was unable to celebrate during lockdown.

However Shona decided to invite some builders from the cafe over to No.8 to join the celebrations.

As David and Gail arrived home, Shona was outside telling one of the builders that the party is for her husband’s gran, who turned 80 in lockdown.

Hearing the noise inside, David realised what Shona had done and told Gail that the buffet was being eaten.

The builder thinking Gail is 80. How rude.

But as Gail looked disappointed her buffet had been ruined, the builder looked at her and said “Happy birthday love.”

Despite Shona saying it was David’s gran’s birthday, and balloons revealing it was for an 80-year-old, the builder believed Gail was the birthday girl.

David and Shona couldn’t help but laugh and viewers were also left in hysterics.

The guy mistake Gail for Aurdery and think 🤔 Gail is 80!😂😂#Corrie

That guy thinking Gail is 80 😂 #Corrie

Coronation Street: What’s next for Shona and David

As the food had all gone, Gail cancelled Audrey’s birthday celebrations.

Fans know that Shona suffered a brain injury earlier this year and has amnesia after coming out of a coma.

Recently she moved back in with David, Gail and the kids after living at Roy’s for a few months.

Next week, Gary tries to convince David to sell his house to Ray’s property mate, Roxy, in order to help his financial situation.

David speaks to Shona about the situation. She assures him she isn’t bothered about him selling the place, as long as they’re together.

Later, David tells Gary he’s agreed to sell the house on the condition it’s leased back to him.

But knowing Ray wants the Platt family out, Gary feels a pang of guilt. Will Ray kick the Platts out?