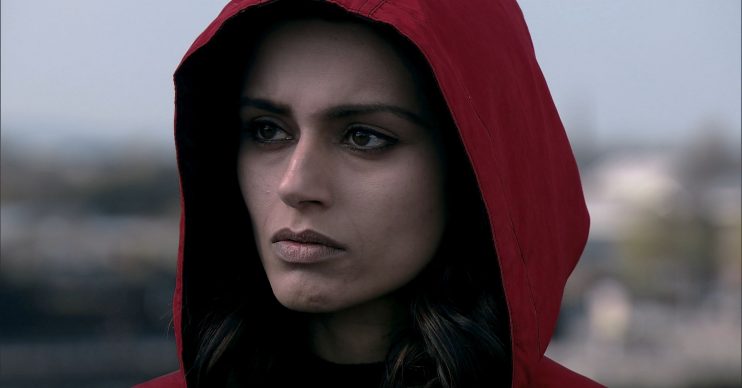 Fans of Coronation Street had a horrifying experience last night when Rana Habeeb returned from the dead.

Nurse Rana was killed earlier this year in the factory collapse but she made a ghostly return last night in a terrifying vision by Carla Connor.

During one of her psychotic episodes, Carla hallucinated seeing her old friend Hayley Cropper in the park.

Following her back to the cobbles, Carla was full of hope that kind Hayley had returned to help her, but as she was lead up the fire escape on Victoria Street it became clear to viewers that Hayley hadn’t returned.

Instead as Carla reached the top, the mystery woman in red turned around and was revealed to be a ghostly Rana who had harsh words for Carla.

She told Carla: “You killed me.”

One wrote on Twitter: “I almost screamed when she turned around and it was Rana #Corrie”

A second said: “Corrie reminded me of don’t look now, with Carla following the red hooded person was expecting something scary though not Rana #CoronationStreet.”

Another added: “Well that was very DONT LOOK NOW with Rana turning round in that red hoodie. I half expected an ugly evil little dwarf to smirk at her! Creepy as hell! #Corrie #DontLookNow #CarlaConnor”

However, other fans were devastated that the woman in red wasn’t Hayley.

One said: “*small voice* I so wanted it to be Hayley… #Corrie”

A second said: “I so wanted it to be Hayley, even if it’s for five minutes @CoroStreetBlog #Corrie”

Were you shocked by Rana’s return? Leave us a comment on our Facebook page @EntertainmentDailyFix and let us know what you think!