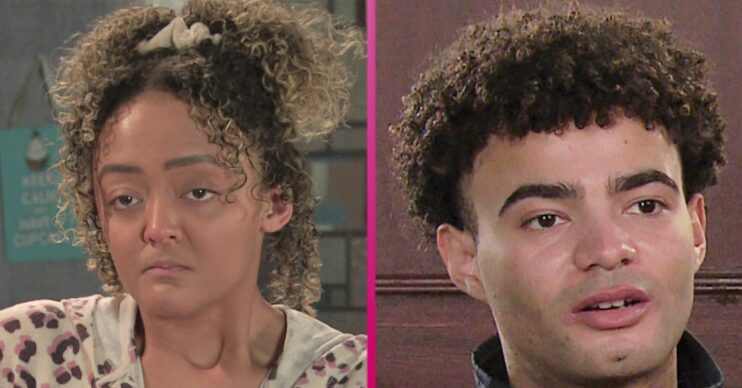 Coronation Street fans have shock theory about Emma and Jon

Emma and Jon began dating a few weeks ago

Coronation Street fans have a shock theory that Emma and Jon could be brother and sister.

Emma and Jon have been seeing each other, but Emma was hiding the fact she was involved in Ted’s death.

Faye and Craig told Emma she needed to end her relationship with Jon, but viewers have a new theory.

Coronation Street fans have shock theory about Emma and Jon

Earlier this year, Emma and learner driver Faye were driving back from a party, but Emma was drunk.

Ted walked out into the road and Faye accidentally knocked him over.

Ted insisted he was fine and didn’t want to go to hospital, however he later died.

Police officer Craig helped Faye and Emma get rid of the evidence but Emma secretly went to the funeral and met Ted’s grandson Jon.

The two have grown a lot closer and began dating.

However fans have pointed out that Emma and Jon look alike and one even has a theory they could be brother and sister!

Emma and Jon look like brother and sister. #Corrie

Coronation Street: What’s next for Emma and Jon?

This week, Craig and Faye convinced Emma she needs to dump Jon to stop their secret getting out.

In tonight’s scenes (Wednesday, April 6) an excited Craig sets off for his first day back in the police force.

Meanwhile back at the flat, things still aren’t good between Emma and Faye.

Soon Jon turns up and demands answers from Emma and Faye.

Feeling guilty, Faye blurts out that they are responsible for his grandad’s death. How will Jon react?

Will he go to the police?

Later a pale Faye emerges from the bathroom and tells Emma she thinks she’s losing the baby.

At the hospital, Craig and Faye awaits the scan results, but they’re shocked by what they’re told.

Will Emma get her happy ending, or will she find herself running from the law?