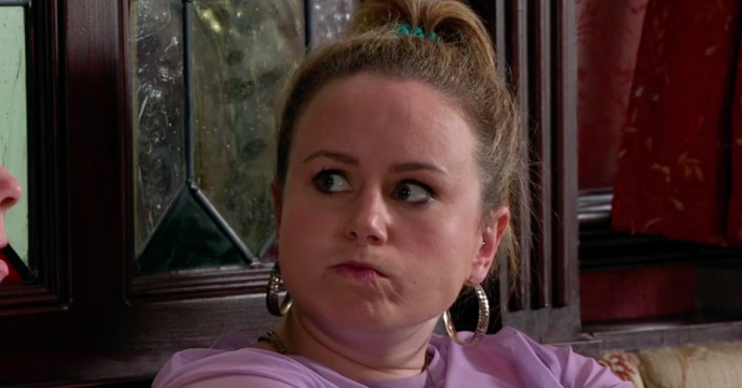 Don't speak with your mouth full!

Fans of Coronation Street have had enough of Gemma Winter’s eating habits.

The pregnant mum to be is eating for five as she is expecting quads – but the way she is eating is driving viewers mad.

In last night’s episode, Gemma tucked into a bag of crisps in the Rovers but didn’t bother to finish her mouthful of food before speaking.

Moaning to her mum Bernie about the attention she was getting, the pair were approached by a public relations expert keen to help.

Get rid of that chav Gemma who constantly eats and talks with her mouth full.

She promised Gemma the chance to earn megabucks from newspaper, magazine and television deals.

However none of it stopped Gemma from continually munching her way through her responses.

And it’s safe to say viewers have hit their limit of Gemma’s eating habits.

A second added: “Gemma talking with a full mouth I’m going to flip my [expletive] lid.”

Another demanded Gemma was axed because of her eating habits: “Get rid of that chav Gemma who constantly eats and talks with her mouth full and her scum mother.”

Soon Gemma will welcome her four babies with on and off boyfriend Chesney Brown and it’s set to be a dramatic affair.

Reports claim Gemma will go into labour in a cable car suspended high above the ground, trapped and alone with Chesney and no-one else to help with the delivery of their four babies.

At least she won’t be eating crisps!

What do you think of Gemma’s eating habits? Leave us a comment on our Facebook page @EntertainmentDailyFix and let us know what you think!