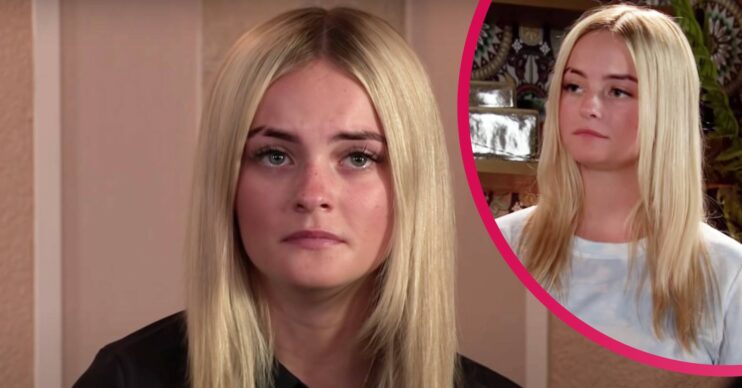 Does she deserve all she gets?

Some Coronation Street fans are absolutely beside themselves that Kelly Neelan is being portrayed ‘sympathetically’.

That’s because Corey Brent has finally admitted it was him who kicked poor Seb Franklin to death.

However, that didn’t prevent some fans raging on social media that soap writers were presenting Kelly as a ‘victim’.

What did Coronation Street fans say about Kelly being a ‘victim’?

At one point during yesterday’s shows, Kelly was told by Nina Lucas there was nothing she could say to her to change matters between them following Kelly’s release.

Kelly also sought to reunite Toyah and Imran after learning they had split up.

But several people watching at home were incandescent about the character’s storyline development.

One person spluttered on Twitter: “Maybe, just maybe Kelly, you shouldn’t have been a vile piece of [blank].

“Maybe then people might feel a bit of sympathy for you! #Corrie.”

Read more: Why is Coronation Street on tonight? Kelly faces a return to prison already in Tuesday’s episode

However, another viewer – rankled by this view – responded: “Plenty of people feel sympathy for Kelly, although maybe just the intelligent ones.”

The original poster then fired back: “There is nothing intelligent about feeling sympathy for Kelly. #Corrie.”

However, someone else agreed that Kelly doesn’t deserve sympathy.

There is nothing intelligent about feeling sympathy for Kelly.

They claimed: “Yeah Corrie trying to portray Kelly as a victim of bullying is just… ugh.

“She’s a bully herself. She shared Asha’s topless photo which is a crime.

“The way she treated Nina and Seb before he died was disgusting. I feel no sympathy for her.”

‘She is not a victim’

Elsewhere on Twitter, another person seemed to quibble over the legal definition of murder.

They tweeted: “But Kelly still was involved? She hit Nina first did she not? She is not a victim at all in this and the attempt to paint her as one is not right.”

Another tweeter suggested Kelly’s wrongful conviction should still go against her.

Referring to the tough decision Toyah and Imran had to make between giving a home to either Kelly or Elsie, they wrote: “I would hope the reason for not allowing Kelly back with Toyah and Imran would be because she was once charged with murder.

“And not because they only have approval for one child to stay with them. Poor social work #Corrie.”

And yet another person bristled: “#Corrie Kelly is vile, this attempt to portray her as a saint… Hell no!”

“She’s a messed up teenager, but she was not guilty of murder,” someone else fired back.

Other viewers, however, noted they do think Kelly has been wronged.

“Poor Kelly #Corrie,” tweeted one fan, adding a crying emoji to their post.

Another stated: “Kelly is innocent, it was all Corey poor cow #Corrie.”

And a third person added: “Kelly should never have been banged up in the first place. Poor Cow.

“May this teach her NOT to get involved with dodgy geezers in the future. #Corrie.”