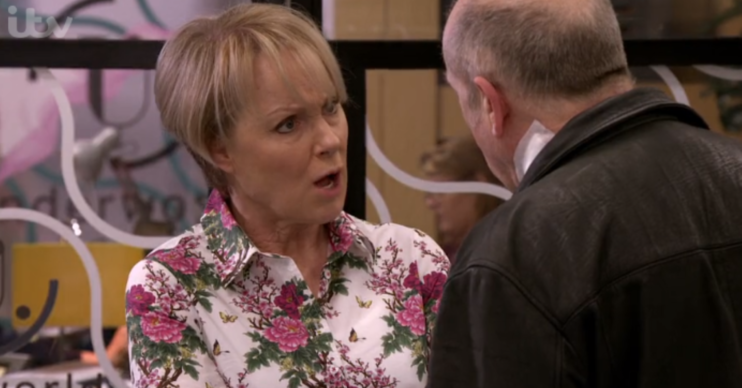 Geoff is continuing to manipulate the situation

Coronation Street fans have been left furious with Geoff Metcalfe as he tried to manipulate his daughter-in-law Sally.

With his wife Yasmeen in prison facing an attempted murder charge after fighting back against his months of abuse, Geoff has been spinning the truth to make it seem as if she was the abusive one.

However there are a few cobbles residents who are questioning Geoff’s side of things. One of them being his own daughter-in-law.

As Sally is starting to have her doubts, last week she told Tim she wanted his dad to move out of their house.

But in last night’s episode (Monday, June 15) Sally tried to defend Yasmeen when she became the talk of the factory.

Later when Geoff and Tim tried to sit with Sally in the pub, she made her excuses and left. Trying to play the nice guy, Geoff made out to Tim that he needed to put his wife first.

However, the radio DJ later paid Sally a visit at her workplace and tried to guilt trip her into feeling bad for siding with Yasmeen.

What did Geoff say?

He told Sally that it was only natural for her to side with Yasmeen, given the fact Sally once went to prison for a crime she didn’t commit.

But Geoff told Sally he had always sided with her over Tim, even when Tim began to doubt his wife’s innocence.

He then took it a step further saying Tim and Sally being on seperate sides was causing his son great stress.

When Sally said Tim wouldn’t choose his dad over her, Geoff responded saying: “Well I hope you’re right. Genuinely. Not just for your marriage, for his heart,” implying his son could have another heart attack.

Viewers were left furious with Geoff as he continued to manipulate the situation.

#Geoff is a piece of work 😡😤 @itvcorrie #Corrie

Watch out Salky! Geoff is going itcagain – lying to manipulate you – don’t fall for it #Corrie #CoronationStreetBlog

Talk truth, that bloody Geoff is a evil, vile, pathetic and manipulative monster!😤😡#Corrie

Will Tim ever start to see his dad’s true colours?