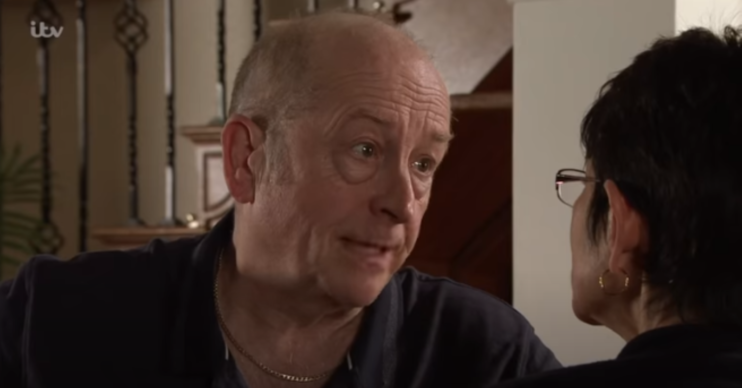 Geoff has been abusing Yasmeen

During the months that Geoff has been abusing Yasmeen, he set up a secret camera to spy on his wife.

In Friday’s episode (May 1), Yasmeen was forced to defend herself when Geoff threatened to kill her. She smashed a bottle of wine over his head and stabbed him in the neck.

In last night’s episode (Monday, May 4) Yasmeen called 999 and told the operator she had just killed her husband. As police and paramedics arrived on the scene, Geoff was revealed to still be alive.

Whilst Geoff was taken to hospital, Yasmeen was arrested for assault.

After being taken to the station, solicitor Imran was ready and waiting to represent Yasmeen.

As Yasmeen was questioned by DS Abney, she struggled to answer, still in shock from what happened.

Later, Imran and DS Abney had a conversation and the officer mentioned No.6 was searched, leaving viewers to question why the police didn’t find Geoff’s camera.

If the police searched the house, why did they not find Geoffs cameras???#CoronationStreet #corrie

#Corrie If the police have searched the house, have they not found the CCTV cameras?

The police said they went through the house so how come they didn't find the camera?#corrie

Some viewers were also annoyed that Geoff had survived.

Geoff set up the camera back in August last year and has been using it to keep an eye on his wife.

Most recently when using the camera, he saw Yasmeen packing things into a bag and hiding it in a cupboard.

When he returned home, he got her to open the cupboard and burnt all of her hidden clothes.

What happens next in Coronation Street?

In the next episode of Corrie (Wednesday, May 6) Alya returns from her trip to Spain. Meanwhile the police continue to search No.6, unaware they are being filmed by Geoff’s camera. Will they find the secret CCTV?

Later in the week Alya tells Sally that Geoff has been controlling her gran for months and she never had a problem with alcohol.

Alya addresses Yasmeen’s family and friends in the Rovers. Will she tell them what’s been going on?

Meanwhile the police continue to question Yasmeen. But Imran is forced to watch as an upset Yasmeen is charged.