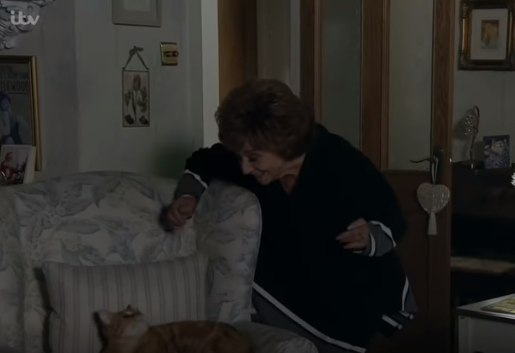 She's in a precarious situation!

Fans of Coronation Street fear that Rita Tanner will be eaten by the cat she’s taking care of, as she is trapped under a Christmas tree.

Viewers know Rita has been struggling with loneliness over the past few weeks as her friends are spending time with their families over the festive season.

Although the Street fave originally planned to go up to Scotland to be with Emily, she had to cancel due to illness.

Unable to return to work as her boss Brian had hired Gail Platt to work over Christmas, Rita has found herself bored and feeling lonely.

In last night’s episode of the soap (December 23 2019), her friend Gemma came over and Rita introduced her to Mrs Mcelroy’s cat, Arthur.

Gemma told Rita she was having a Christmas tree brought over for her and would help her decorate it later.

But with four newborn babies, Gemma had her hands full.

Later disaster struck after Rita decorated her tree. When she got onto a step to fix an issue, the tree came tumbling down onto her.

Although Gemma was going to go round to give her a Christmas present, Chesney pointed out Rita must’ve left as the lights in her flat were out.

Fans were worried no one would come to Rita’s aid as they think she’s away… and that Arthur the cat will end up eating her.

Arthur the cat is so going to eat Rita. The greedy monkey. It is a very cute cat, wonder if its Barbara Knox's cat? #corrie pic.twitter.com/nrq4r7m3g5

Poor Rita, let's hope somebody finds her soon because the cat might start getting hungry #Corrie

With everyone thinking Rita is away, will someone come to her rescue?