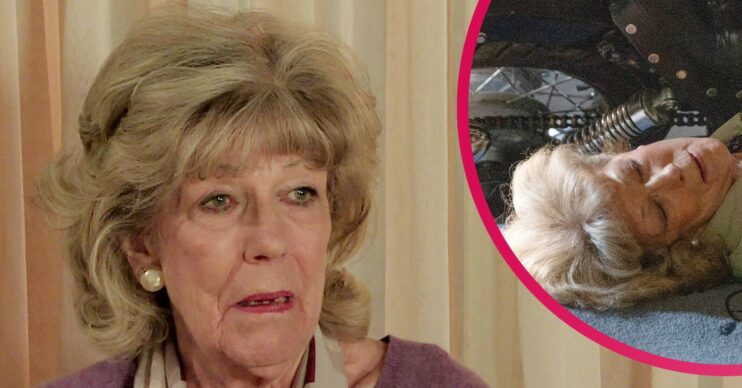 Audrey had a bad accident

She fired all of her staff at the barber’s and ended up having a big accident in last night’s episode (Wednesday, June 22 2022).

Gail has been concerned about her mother’s drinking for months.

But in last night’s scenes Audrey ended up firing David, Kelly and Maria before falling out with Gail and getting trapped under the motorbike in the barber’s.

During the episode Audrey made the decision to return to work.

She soon turned up at the barber’s and told her grandson David she was coming back to work.

However when David realised she had been drinking, he told her he was no longer allowed to cut hair.

Audrey ended up tripping over Gail’s Thai brass elephant. Blaming Kelly she fired her from the barber’s before firing her grandson.

Later Maria turned up to find a tipsy Audrey playing table football with Ryan, who had been in for a haircut.

When Maria suggested to Audrey that she went home, Audrey also fired her.

Maria told Gail what happened and that Audrey needed help.

Gail went over to the barber’s and it seemed like the mother and daughter managed to put everything behind them.

However when Gail brought up Audrey’s drinking, she was furious.

After Gail left, Audrey ended up stumbling into the motorbike in the barber’s.

It ended up falling on Audrey and trapping her, leaving her crying out for help.

However fans were left completely divided by the scenes with some saying they’re loving Audrey and the storyline.

A great episode of Corrie, humour and pathos…and Audrey was fantastic. #Corrie

But others weren’t so impressed by the scenes and don’t seem to be enjoying the storyline.

Could not care less about Audrey lmfaooooo #Corrie

Nah. I don't like what #Corrie are doing with Audrey just now