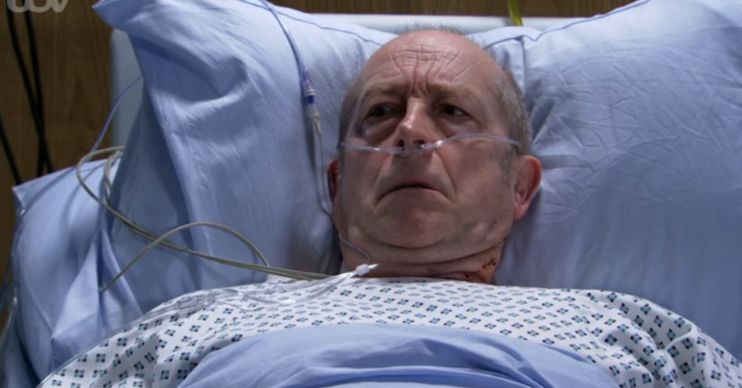 Geoff is the one who's been abusing Yasmeen

Coronation Street fans were disgusted as Geoff woke up and accused his wife Yasmeen for trying to kill him in last night’s episode (Wednesday, May 6).

Last week, after months of abuse, Yasmeen attacked Geoff in self-defence as he threatened to kill her. The incident ended with Yasmeen smashing a bottle of wine over his head, before stabbing him in the neck with the broken glass.

Horrified by what happened, Yasmeen called emergency services. Whilst Geoff was taken to hospital, she was arrested for assault.

Due to shock, Yasmeen has been struggling to explain what’s really been going on. But in last night’s episode, her granddaughter Alya returned from her trip to Spain.

Later detectives paid Geoff a visit and he told them he and Yasmeen had been arguing about her drinking when she attacked him.

After hearing what had happened that night, Alya confronted Geoff in front of the police, Sally and Tim, and told them how he’s been controlling Yasmeen.

Although Geoff tried to play the victim and the nice guy, Alya saw right through him and was disgusted.

Alya wasn’t the only one as viewers were also disgusted with Geoff and furious that he claimed Yasmeen had attacked him unprovoked.

#Corrie …he's evil I wish she'd finished the job…. The whole of the UK agrees alya!!!!
Finally after all the grotesque grrrr Geoff's amazing and kind rubbish someone actually knows the truth and voices it!!!! pic.twitter.com/PJbBeFUeMp

Why is Geoff playing the victim!Why?!#Corrie

My face when Geoff woke up. #Corrie pic.twitter.com/ZGybdrm32d

The whole of the UK when Geoff regained consciousness @itvcorrie #Corrie pic.twitter.com/WCGN1bnhiM

In next week’s Corrie episodes, Yasmeen attends her bail hearing.

Imran is representing her and attempts to fight her corner in court.

Tim is also in court wanting answers over what happened. But is Sally having doubts about what happened between Geoff and Yasmeen?

Toyah, Ryan and Alya all attend to support Yasmeen in court. After the hearing, Alya vows to unmask Geoff’s true colours.

She later calls at the Rovers and tells Sean that Yasmeen was the victim of domestic abuse.