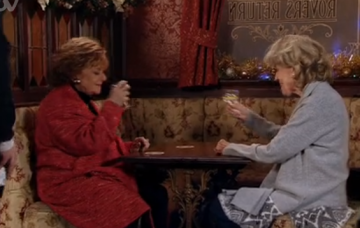 Fans were heartbroken by the shocking news

Coronation Street viewers have been left devastated after a legend’s death was revealed last night.

In last night’s episodes funeral director Archie Shuttleworth was revealed to have passed away off-screen.

Hairdresser Audrey Roberts was shocked as she received the news and went to the Rovers for a quick gin to help with her shock.

There, she told Rita Tanner of their friend’s death and the pair toasted to his life.

But it was too much for viewers who were devastated by the gentle funeral boss’s death.

Read more: Coronation Street SPOILER: Will Rita get kicked out of the Kabin?

One wrote: “Poor Archie The Blanche mentions making me 😭😭😭 #Corrie”

A second tweeted: “No, not Archie Shuttleworth. I loved him. #Corrie #RIPArchie”

Archie, played by actor Roy Hudd, was best known in the show for being Blanche Hunt’s boyfriend.

The funeral director eventually ended his relationship with battleaxe Blanche after he developed feelings for Audrey Roberts.

But he left Weatherfield after Audrey let him down gently and told him there was no future for them.

He was last seen in Weatherfield in 2010 when he made a return for Blanche Hunt’s funeral after her death.

Audrey and Archie were the only people who realised Richard was a serial killer conman.

Archie saved Audrey when Richard had her entire family convinced she was losing her marbles, but now it seems his death will bring her more tragedy when she’s ripped off.

Audrey is going to be shocked when it’s revealed Archie left her a huge sum of money, but when the money is stolen, all hell breaks loose.

With Audrey still in a relationship with conman Lewis Archer, will the windfall convince him to return to his life of crime and take the money for himself?

Were you devastated by Archie’s death? Leave us a comment on our Facebook page @EntertainmentDailyFix and let us know what you think!