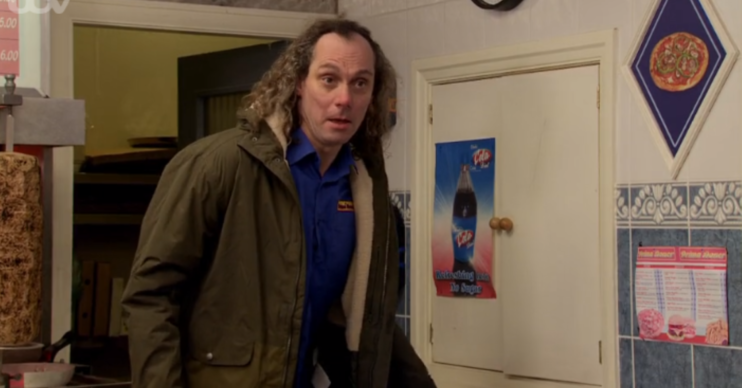 They want a backstory for Matt!

With Gemma struggling with postnatal depression after the birth of her quads, her fiancé Chesney agreed to take a step back from his job at the kebab shop, where Gemma is also employed

Instead of Chesney coming into work, Gemma’s mum Bernie agreed to take over his job and will give them the money in return for a place to stay.

However the two women soon began to bond and the pair had a sneaky cider whilst they worked.

Later, a never-seen-before character, who went by the name Matt, appeared. Although Matt has been mentioned before, he’s not been seen on-screen.

As he walked in, a tipsy Bernie said: “Oh you are tall aren’t ya? Our Gemini said you were.”

Cathy soon made an excuse for her and Bernie to leave the shop, stating they were going to see Dev and she left Matt in charge. This confirms he must’ve worked at the takeaway for some time.

Although he was only on screen for a minute or two, viewers are intrigued by the character and want to see more of him.

Who is kebab man? Why is this his first appearance? Where is Chesney? I have so many questions! #corrie

This new guy in the kebab shop is giving me serial killer vibes!#corrie #CoronationStreet

Who the hell is that new guy in the kebab shop, Where's he come from #Corrie

How many people work at Prima Doner?

Will we see more of Matt?

Whilst it hasn’t been confirmed if ‘tall Matt’ will make any more appearances, we can assume with both Chesney and Gemma off work, he will be picking up some shifts.

What type of backstory would you like to see for Matt?

Would you like to see more of Matt? Leave us a comment on our Facebook page @EntertainmentDailyFix and let us know what you think of this story.