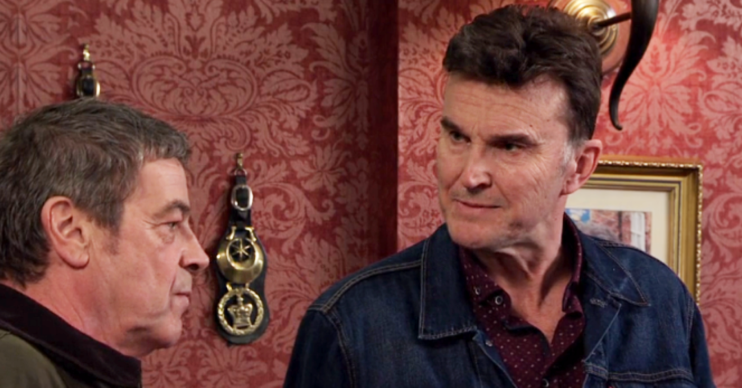 Coronation Street fans are convinced Scott is involved with Jordan and Chelsey after spotting a clue in a recent episode.

Last week, Carla was confronted by a woman named Chelsey, who she met and stayed with last year while living rough.

However Chelsey immediately demanded Carla pay her a grand, claiming the former businesswoman flushed drugs down the toilet during her stay.

Meanwhile, a man named Scott, who once worked with Carla’s dad Johnny, has been staying at the pub’s B&B.

Although it’s clear Scott has a past with Johnny, viewers also think he could be connected to Chelsey and Jordan after spotting a clue in Wednesday’s episode (June 17).

During a scene in Roy’s cafe, Carla confronted Chesley about stealing cutlery from her friend’s business.

However as the two women spoke, viewers noticed Scott was in the background and appeared to be listening in.

i saw that sneaky side eye from scott, i can guarantee ya he knows chelsey somehow 👀 #corrie

Corrie theory: Scott is the one who gave the drugs to the people Carla was staying with during her mentam health storyline and that Carla flushed down the toilet. #Corrie

In Friday’s episode (June 19), Chelsey and Jordan continued to harass Carla for the money, threatening to tell people she had slept with Jordan in exchange for a place to stay.

But Carla refused to be blackmailed and made a brave decision. In front of everyone in the Rovers, she explained how when she had a breakdown she ended up sleeping with Jordan.

As she revealed they were trying to blackmail her, the whole pub showed their support. As Scott grabbed Jordan to throw him out, Abi ended up chucking Chelsey out.

Later it was announced on the radio that a man and woman had been attacked. Not wanting Carla to hear, Peter turned the broadcast down.

Did he have something to do with it? Or did Scott?

In this week’s episodes, Carla thanks Scott and Abi for helping her deal with Jordan and Chelsey.

As Carla leaves Abi, she spots a headline in the Gazette about the assault and wonders if the two who were harassing her were the victims.

She confronts Peter about it and accuses him of attacking Chelsey and Jordan. He’s offended and immediately denies any involvement.

Peter later assures her he was in an AA meeting at the time of the assault. But will she believe him?