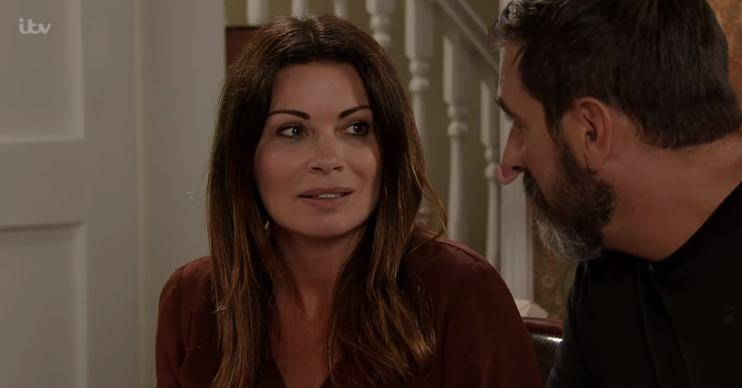 A Coronation Street viewer is convinced that the secret newcomer Scott is hiding is that he’s really Carla Connor’s dad instead of Johnny.

The soap has yet to confirm who or what Scott is and viewers have only seen Johnny’s panic after he realised Scott had arrived on the cobbles.

After seeing him arrive in the pub Johnny went into hiding to avoid him and let Jenny deal with him.

And realising Scott intended on staying long term at the pub, Johnny hatched a last minute plan to flee the country with Jenny.

He suddenly revealed how he’s desperate to see his grandson and Eva Price in France and booked them tickets.

Johnny hopes by the time he’s back, Scott will be a dim and distant memory – but fans aren’t so sure.

Actor Tom Roberts has revealed how Scott will be a villain on the cobbles.

He told Metro: “I am fully prepared that people will take a dislike or at least a mistrust to Scott because he appears to be targeting Johnny.

“We’re playing it at the moment that it’s just a pure coincidence that he has turned up but who knows? It might be explored down the line that he could have been tracking Johnny but for now it just seems like a ‘fancy seeing you here!'”

He added: “No actor wants their character to be instantly disliked by the viewers and there are layers to him that are explored – and he has, not necessarily links to other characters, but he becomes involved in a lot – not just the Johnny storyline.

“But yes, Johnny and Scott’s past is a big one and there are some big surprises and twists which will be drip fed to the audience and I can’t wait to see the reaction.”

Who is Scott really?

One of the surprises fans are expecting is that Scott could be Carla Connor’s real biological father – and not Johnny.

With Carla his only remaining child on the cobbles, it would explain why Johnny wants Scott gone so badly.

One said: “Imagine Scott was Carla’s REAL dad, now THAT would be a twist.”

A second said: “Intrigued about Johnny’s past.”

Who do you think Scott is? Leave us a comment on our Facebook page @EntertainmentDailyFix and let us know what you think!