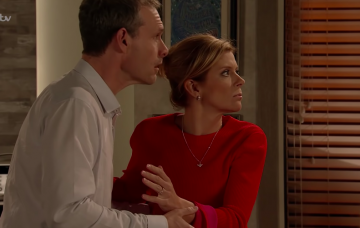 It was all a bit Hattie Jacques for viewers

Coronation Street viewers were left unimpressed this week by the show’s Carry On Corrie humour.

Leanne and Toyah Battersby both caught each other romping with their not so secret boyfriends and far from some classic Corrie humour, it all fell flat for fans.

As Leanne relieved Nick Tilsley of his trousers in the through lounge of their flat, Toyah was busy having fled to hide in the bathroom.

Unfortunately she just couldn’t keep her hands off rooting through the cabinets.

And a particularly loud deodorant rumbled her as Leanne panicked realising someone was in the flat.

Read more: Corrie fans crushing on Imran in his pants as relationship with Toyah is exposed

A sheepish Toyah replied: “Sorry, it’s only me.”

At that Leanne practically threw Nick out onto the balcony, trousers in hand, as Toyah emerged from the bathroom in this bizarre scene.

They shared chilly pleasantries on the balcony as inside Leanne and Toyah asked each other why the other was not at work as they claimed.

The scene, no doubt meant to be funny, didn’t have fans howling with laughter.

It didn’t even muster up a small titter from some, instead viewers took to social media to slam the scenes as like something from the Carry On films.

One said: “Ew. Make it stop. I don’t need to know what the Battersby sisters are battering. #Corrie”

A third wrote: “#corrie #coronationstreet Oh ffs, so now the main storylines are going to be around the Battersby sisters’ love lives? Yawn”

However one fan did find it funny.

He tweeted to say: “It’s ‘Carry On #Corrie’ tonight. From trouserless Battersby boyfriends and sneaky shenanigans, to sisterly solidarity resulting in madcap mayhem.