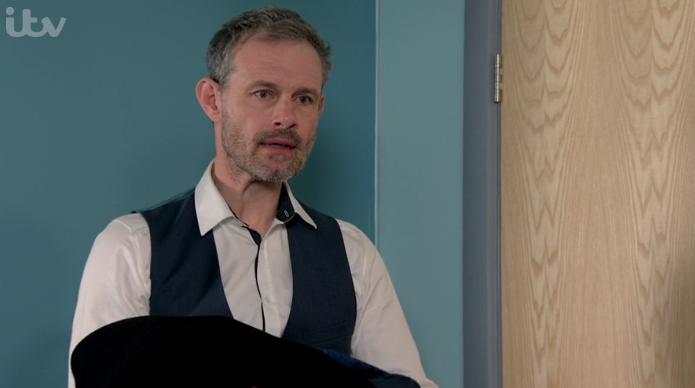 Coronation Street fans have slammed Nick Tilsley calling him ‘selfish’ after he kicked off at Steve and Leanne over their son Oliver.

Recently Oliver has been having seizures and in last week’s episodes he was brought to the hospital.

In Monday’s episode (May 18) the worried parents were given the news that the toddler could have mitochondrial disease.

As the hospital continue to run tests on Oliver, Steve, Leanne and Leanne’s boyfriend Nick have all stayed by his side.

In last night’s visit to Weatherfield (May 20) Steve and Leanne reminisced over Oliver’s childhood and remembered a clown toy that Oliver had.

Leanne laughed as she remembered Steve putting Oliver in a swing bouncer and wanting to put the clown out of reach to wind him up.

But as they thought about happy times from their son’s early years, Nick became upset.

When Leanne asked what was wrong, Nick said: “I can’t do this. You know, laughing, reminiscing like he’s gonna be alright. Like he’s got some kind of cold.”

The worried mum started to have a go at her partner, but Nick quickly turned the conversation round asking what he is to Oliver.

However Leanne told him to leave, furious at him for upsetting her in this already difficult time.

Leanne wasn’t the only one who was angry. Viewers slammed the businessman for his ‘selfish’ behaviour.

So Nick’s being selfish & self-absorbed. Oliver is seriously ill yet he’s made a huge drama about himself #Corrie #CoronationStreet

steve and leanne were only bringing happy memories about Oliver. Nick is so childish #corrie

nick REALLY isn't choosing the right time to be jealous of leanne and steve, seriously? #Corrie

You tell him Leanne. With Nick it's always about him. #corrie

At a time like this I don’t think Leanne is going to care what Nick is. This isn’t about him. #Corrie

Nasty jealous Nick do one #Corrie

Coronation Street: What’s next for Oliver, Steve and Leanne?

This week, Leanne and Nick eventually make up. But next week, there’s more bad news ahead.

So Nick’s being selfish and self-absorbed.

The doctor tells Steve and Leanne they are reducing Oliver’s sedation, however she warns the little boy may have suffered brain damage.

Leanne refuses to believe it and is adamant Oliver will make a full recovery. When Oliver wakes up he says ‘Mummy’.

Whilst Leanne is convinced all is fine, Steve and Nick are worried.