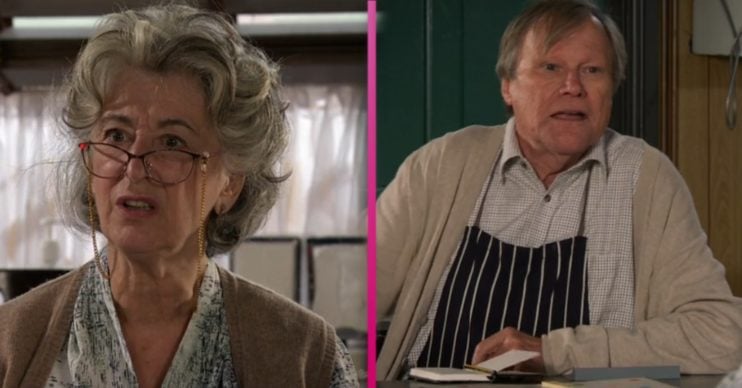 Coronation Street: Fans beg for Evelyn and Roy to get together

Coronation Street fans are begging for Evelyn and Roy to get together after their sweet scenes last week.

Recently Evelyn got in a relationship with her old flame Arthur. But last week he ended their relationship after she suggested they went away together for a month.

He later confessed to her that he has a wife who is in hospital, however she had a stroke four years before and was left badly brain damaged.

But Evelyn was devastated and ended things with Arthur. Later, she went over the café and told Roy about her breakup.

As Roy cooked his vegetarian paella, Evelyn offered to help and the two ended up spending some time together.

In the scenes, the two played scrabble together and Evelyn said she would’ve missed her life on the cobbles if she had gone away with Arthur.

Fans loved the scenes between Evelyn and Roy and begged for them to become a couple.

Evelyn just get with Roy such a well suited couple #Corrie

Am I the only one that's wants Roy and Evelyn to get together.#Corrie

Evelyn and Roy, the next #Corrie power couple 😏

Wonder if something may happen between Roy and Evelyn #Corrie

Coronation Street fans know Roy was married to Hayley, who died in 2014.

Hayley was diagnosed with pancreatic cancer in 2013. However her cancer was terminal.

Evelyn, just get with Roy. Such a well suited couple.

She decided she wanted to die on her own terms and in January 2014, she took her own life.

The following year, Roy met Cathy Matthews and the pair eventually started a relationship. However it wasn’t meant to be and the pair split up, but appear to have remained friends.

Meanwhile, Evelyn was married to a man named Harold, but he died back in 1982.

Now Evelyn and Arthur have split up, could there be a romance ahead for her and Roy?

Do you think Evelyn and Roy would make a good couple? Leave us a comment on our Facebook page @EntertainmentDailyFix and let us know what you think of this story.