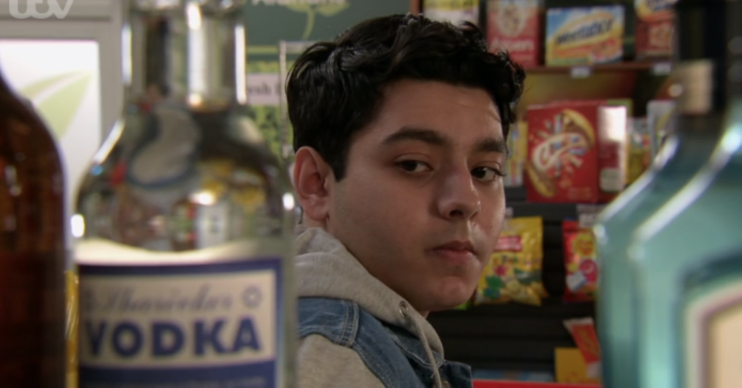 Aadi was recast this year

Coronation Street fans were left baffled as Aadi Alahan has appeared to have aged by 10 years pretty much overnight.

Recently Corrie announced the role of Dev’s son Aadi has been recast and new actor Adam Hussain would be taking over the role from previous actor Zennon Ditchett.

In last night’s episode (Wednesday, April 15), Adam made his debut on the soap.

As Dev taught him about stock rotation, Aadi turned to his dad and said: “Dad I said I’d help out for a couple of hours. This isn’t the Lion King.”

But as Dev went out the back and customers left the shop, 14-year-old Aadi quickly pinched a bottle of alcohol off the shelf.

How is Aadi now 25? #corrie #coronationstreet

Errrrmmmmm??? has Dev noticed that his son has been switched!😳😳😳🤣😳🤣

Why was Aadi recast?

They also stated that previous actor, Zennon, who played Aadi from 2009 until 2019, left the show to focus on his A-Levels.

After stripping for her crush Corey on a video call, he secretly recorded her. But disaster struck when Kelly got her hands on the video and shared it to their peers.

Next week, Aadi gets into a fight when he catches some boys staring at his twin sister.

It soon becomes clear they have seen the video of her stripping and he sees red, tackling one of the lads.

Read More: Are Emmerdale and Coronation Street on tonight? You daily soaps guide including EastEnders

But as a fight kicks off, Mary struggles to break them up.

After Dev finds out about the video, he confronts Asha but she makes him swear not to go to the police.

Asha is furious that her dad has gone back on his word. Will the police discover who really shared the video?

Are you looking forward to Asha’s new storyline? Leave us a comment on our Facebook page @EntertainmentDailyFix and let us know what you think!