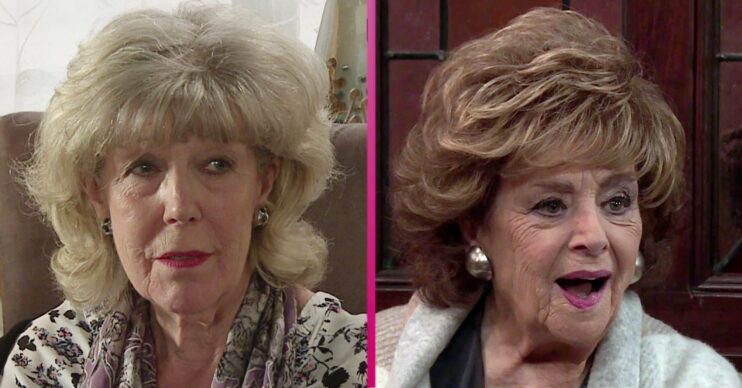 Audrey and Rita had a few drinks in the pub

In last night’s episode (Monday, June 20) Audrey ended up in the Rovers and buried the hatchet with friend Rita, who she fell out with months before.

After the two got drunk in the Rovers together, fans called for more Audrey and Rita scenes.

In last night’s episode Gail asked Shona to keep an eye on Audrey. However Audrey ended up sneaking off to the Rovers.

When Gail found out she went over to the pub to find her mum.

She tried to stop her mum from drinking a bottle of wine but it ended up going all over her.

Later Rita approached Audrey in the pub and put their past behind them.

As the two shared a drink, Audrey told Rita how Gail thought she was incompetent due to her age.

However she was going to let her hair down and Audrey and Rita cheers to “growing old disgracefully.”

Soon Daisy joined in on the conversation and Rita explained how Audrey planned to grow old disgracefully.

At the bar Daisy, Audrey and Rita were doing shots to tequila and lemonade.

As Rita prepared to leave, Daisy joked she ordered her a stripper.

But Audrey asked why Daisy didn’t ask her ex-boyfriend, Ryan, to do it.

Please give us more scenes of Audrey and Rita drinking shots.

When Daisy told her Ryan was ancient history, Audrey was disapppointed.

Soon Audrey and Rita stumbled drunk out of the pub, and fans have demanded to see more scenes of the two women getting drunk.

Drunk Audrey and Rita, that's #corrie for me