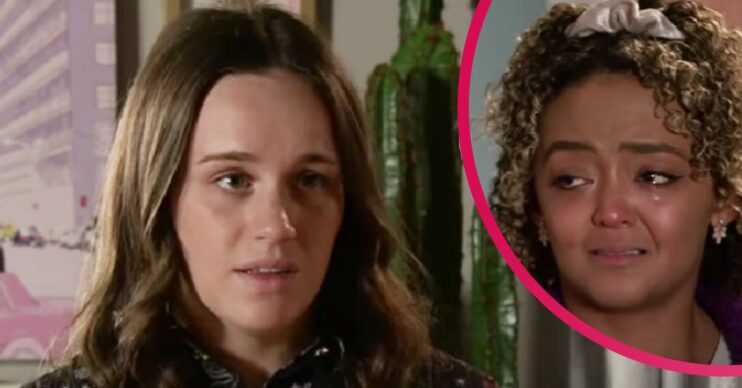 Emma had to break things off with Jon

Coronation Street fans are fed up with Faye Windass‘ ‘selfish’ behaviour after she ordered Emma to break up with Jon in last night’s episode (Monday, April 4).

Faye and Craig found out Emma had been seeing Ted’s grandson and told Emma she needed to end her relationship with Jon to stop him from finding out about their involvement in Ted’s death.

But fans weren’t happy with how Faye has been treating Emma.

Coronation Street: Faye orders Emma to break up with Jon

Earlier this year, Emma and Faye were driving back from a party when they accidentally knocked over an elderly man named Ted.

Ted later died and Emma and Faye managed to cover their crime with the help of police officer, Craig.

Emma met Ted’s grandson Jon at the funeral and the two have recently started seeing each other.

In last night’s scenes Jon asked Emma if she wanted to move to Australia with him and she said she would need to think about it.

However when Jon returned to Emma’s flat to collect his phone, he ended up meeting Craig and Faye, who were horrified to see Emma was still meeting up with Jon.

Jon recognised Craig as the two met at Ted’s flat when Craig was trying to retrieve evidence pinning Faye and Emma to the crime scene. However he was unable to remember where he knew him from.

After Jon left, Faye snapped at Emma saying: “How could you be so stupid?”

Faye and Craig continued to have a go at Emma, telling her she needed to break things off with Jon.

Later Emma met up with Jon again and broke things off.

Back at the flat, Emma was in tears as she told Craig and Faye she broke things off with Jon.

When Faye asked if Jon suspected anything, Emma told her all she cared about was herself and fans agreed with her.

Faye is being very selfish #corrie

Faye and Craig are like a wet weekend! They’re being awful and so selfish. #corrie

How selfish is faye #corrie