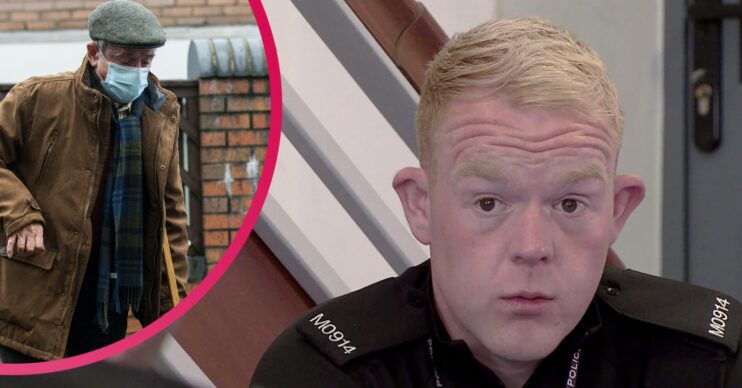 Faye and Emma ran over Ted

Coronation Street fans have all been left saying the same thing as Craig Tinker revealed details of Ted’s death.

Earlier this week, learner driver Faye was driving herself and a drunk Emma home from a party when they ran over an old man named Ted.

Ted seemed okay and refused to go to the hospital but when the girls checked on him later they found Ted dead in his flat.

Faye refused to go back to prison and together her and Emma cleaned the flat up.

However in Tuesday’s episode (January 4) Emma felt guilty and anonymously called the non-emergency number pretending to Ted’s neighbour, saying she was concerned she hadn’t seen him for a few days.

Later in the pub, police officer Craig and Faye began talking to Michael and Emma about his day.

He told them an old man had been found dead in his flat.

But when Michael said it’s sad when someone dies alone, Craig said: “This is the thing. We’re not sure he was alone. He had a bruising down one side of his body. They’re treating his death as suspicious.”

Emma pointed out old people fall all the time and Michael even said he could have tripped over his cat.

However Craig continued: “There was no cat. Just an anonymous tip off.”

He said someone called in, worried Ted hadn’t been seen in a while but they didn’t leave a name.

In last night’s episode (Wednesday, January 5) Faye and Craig moved into the salon flat with Emma and Tyrone.

As Faye, Craig and Emma had a drink, Faye asked her boyfriend about the investigation and he told them he got a lead.

He explained to them that a neighbour mentioned they let a delivery driver into the building and a parcel was in Ted’s flat, signed for after Ted died.

Emma and Faye looked worried knowing it was Emma who signed for it.

Craig explained the police planned to track down the delivery driver and find out who signed for it.

But viewers were pointing out that Craig probably shouldn’t be telling his friends details of Ted’s death.

Should Craig be discussing the details of the case in the pub? #Corrie

Should Craig be gossiping in the pub? #CoronationStreet

Should Craig be telling them all that #Corrie

You can't be blurting out all these confidential things to 'em, Craig! #Corrie

Should Craig be talking about an investigation?

While viewers pointed out Craig shouldn’t be talking about the investigation, did he actually break any rules? The short answer is, yes.

A member of the police force told Entertainment Daily: “Officers aren’t allowed to provide information on a live investigation to the public generally as it breaches GDPR (General Data Protection Regulation).”

“All police forces up and down the country have measures in place to ensure breaches such as that don’t happen.”