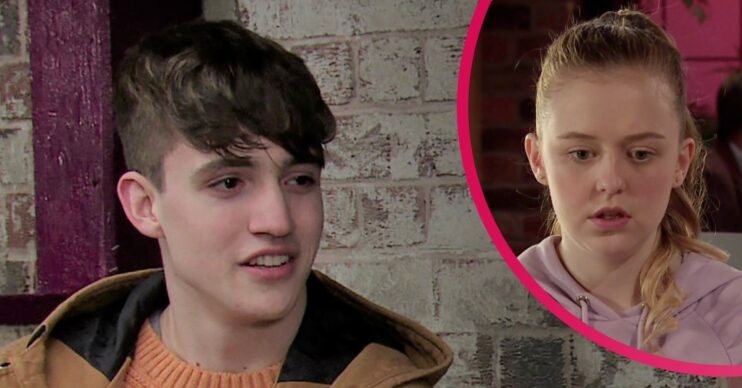 Coronation Street fans have a heart-breaking prediction about newcomer Aaron after this week’s scenes.

Summer recently met Aaron at a diabetes support group and the two seemed to like each other.

However after Summer opened up about her eating disorder, Aaron broke things off with her.

Now fans think they know why Aaron decided to cut Summer off.

Aaron and Summer met a couple of weeks ago at a support group and exchanged numbers.

Summer seemed to take a liking to Aaron.

When her ex-boyfriend Aadi suggested they give their relationship another go, Summer let him down gently, telling him she was interested in someone else.

In Monday’s scenes (May 9) Summer met up with Aaron and he kept complimenting her, saying how gorgeous she is.

Soon opened up about her battle with bulimia.

She told him how was stressed from school work and she hated how she looked and felt.

Summer revealed how the only way she felt in control is to binge and purge.

She said she stopped but wasn’t finding it easy and every day is a battle for her.

However Aaron quickly told her he had somewhere to be and rushed off.

In last night’s episode (Wednesday, May 11) Summer and Aaron met up in Roy’s cafe.

Summer told him it was nice to be able to talk to someone. However Aaron warned her how dangerous making herself sick is.

He made her promise she won’t do it again and Summer promised.

Summer then asked him if he wanted a drink but Aaron told her he just came to check she’s okay, but said he didn’t think they should see each other outside of the group.

Summer was confused as to why Aaron had changed and asked why they couldn’t be friends.

She asked if he was seeing someone else and he said he wasn’t, but didn’t want to get involved in something new.

When Summer suggested they could just hang out, he said no and that they were done.

However fans think the reason Aaron no longer wants to see Summer is because he is struggling with an eating disorder himself.

I think maybe Aaron may have a disorder too or he knows someone else who does like a girlfriend etc. #Corrie #CoronationStreet @itvcorrie

I reckon Aaron has an eating disorder too #Corrie

#corrie my money is on Aaron having an eating disorder too

I wonder if Aaron has one too? #Corrie