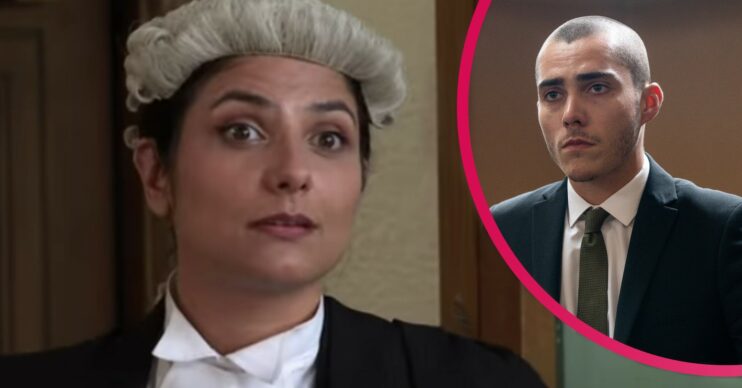 Last month, Imran’s ex-wife Sabeen returned to Weatherfield and revealed to Imran she is the barrister on Corey Brent’s defence team.

Corey and Kelly Neelan are currently on trial for the murder of Seb Franklin and attack on Nina Lucas.

In last night’s scenes (Wednesday, September 1) Nina recalled how she saw Corey kicking Seb and Kelly begging him to stop.

However Sabeen cross-examined Nina and suggested her memory wasn’t correct, as she was unable to remember what happened for some time after the attack.

Later, during a break, Corey, Sabeen and Stefan had a chat. Stefan questioned why Nina remembered Corey attacking Seb and Corey said she had it in for him.

Corey then proceeded to call Nina “a freak” to Stefan and Sabeen, leaving the two shocked.

While fans are hoping Sabeen can see that Corey isn’t innocent, other fans have started to wonder if she actually has a connection to Corey.

Fans have come up with a theory that she’s secretly dating Stefan, who is thought to be married to Corey’s mother.

Was that a flash of doubt across #sabeen ‘s face. Please tell me she’s realised #Corey is lying #Corrie #catchup #seb #nina

While it wouldn’t have impact on the case, it would be an interesting plot twist.

Coronation Street: What’s next for Corey, Stefan and Abi?

Later this week, Abi rails at Stefan outside of court and suggests it’s time Corey starts telling the truth.

Corey takes the stand and lies through his teeth, claiming Kelly attacked Seb as he tried to stop her.

Soon Corey paints himself as the victim, telling the court how Kelly’s dad is a gangster an she threatened to have him killed if he reported her to the police.

As the trial continues, Imran suggests to Eli that he’s lying about Kelly to get a reduced sentence himself.

Outside Court, Abi launches a verbal attack on Stefan, accusing him of trying to buy Corey’s innocence with bribes.

Stefan denies it, but it’s clear he’s rattled. Determined, Abi searches through his social media accounts. Will she find anything?

Have you been watching this week’s Coronation Street? Leave us a comment on our Facebook page @EntertainmentDailyFix and let us know what you think.