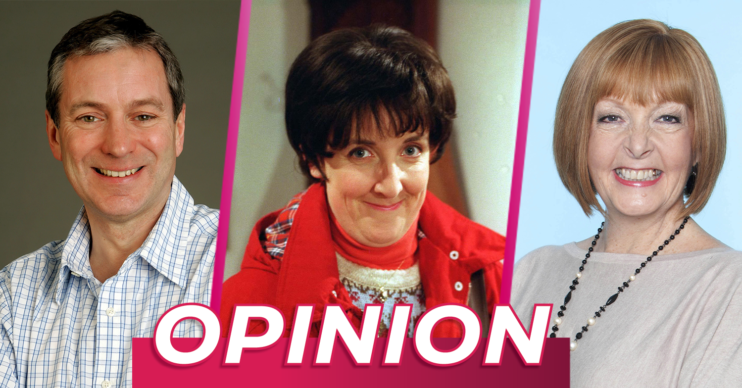 Coronation Street, Emmerdale and EastEnders characters that need to be brought back from the dead

A bit far-fetched? We can but dream!

In Coronation Street, Emmerdale and EastEnders, characters end up dead for a number of reasons.

Sometimes an actor decides to leave, and for other storylines it works best if a certain character is bumped off.

But some characters viewers hate to lose more than others… which would we like to see brought back from the dead?

EastEnders fans everywhere were sad when Ben Mitchell whacked poor Hev over the head with a photo frame back in 2012.

Sweet Heather was loved by many, but especially her best friend Shirley, who always tries to remember her pal.

Read more:  When is Kim coming back to EastEnders? Tameka Empson returns to Albert Square tonight

But it would be interesting to see Heather come back from the dead. Whilst it would be hard to explain, stranger things have happened in soapland!

And actress Cheryl Fergison has previously expressed she would like to return to the show.

Tina was a fan favourite at Coronation Street played by the wonderfully talented Michelle Keegan.

After six years on the show, Michelle decided to leave and sadly it was decided Tina would be killed off.

A big mistake in my opinion. It would’ve been good to see the door left open for Michelle. While she has gone on to have an amazing acting career, I would’ve love to see her return.

Maybe there could’ve been a mix up at the hospital. It wasn’t Tina viewers saw die, it was her doppleganger?

I was truly devastated when Val was killed off in 2015. However, Val was already brought back after her death.

She appeared to Eric shortly after her death in 2015. And in the 2017 Christmas episode, Val came back as a ghost in Robert Sugden’s dream.

While it would be really hard to explain Val turning up alive –  you know, because she was killed by a giant shard of glass – I think it would be interesting to see Eric’s reaction.

The death of Hayley Cropper just makes me feel sad every time I think about it.

Hayley’s first Corrie appearance was the year I was born so I grew up watching her.

She and Roy were a truly brilliant pairing and her death left me an emotional wreck.

Hayley’s death was the climax of her cancer storyline and in all honesty I don’t think it would be sensible to bring her back alive.

But I would like to see her appear in a dream sequence, maybe to give advice to Roy.

I also can’t help but feel Hayley and Roy’s niece Nina would’ve had a beautiful friendship with her.

Another death which left me devastated was Ashley Thomas. Over the course of two years, viewers saw him gradually start to lose his memory and he was diagnosed with vascular dementia.

Like Hayley in Corrie, I think it would be very hard to explain a character who died of an illness coming back from the dead. But perhaps he could have a secret twin… an evil one.

This could explain Arthur’s behaviour of late,  acting out over the last eight months.

Like Val in Emmerdale, Rana actually has appeared since her death.

Last year, Rana was killed when the Underworld factory roof came down. She got caught up in the rubble and died as a result from her injuries.

As Carla Connor believed the accident was her fault, she ended up having a complete breakdown and, in a state of psychosis, she saw Rana.

Her mental state had her believing Rana was still alive and from Carla’s perspective, viewers saw an angry Rana blame her sister-in-law for her death.

I would move heaven and earth to come up with a plot to get her back.

A death which seemed to really upset Emmerdale viewers was that of Gerry Roberts who was murdered by his former prison cellmate, serial killer Lachlan White.

But when Gerry kept joking about Lachlan’s secret, he panicked and knocked down the column in the The Grange B&B (which was having work done at the time).

Gerry survived but psycho Lachlan made sure he was dead by bashing him over the head with a giant rock.

Although Gerry wasn’t in the show for a long time, he was comical and brought a lot of joy to the show. I think it would be interesting to see him return, revealing he actually survived and went into hiding.

I mean Lachlan is now in prison, so technically if Gerry was in hiding he’d be safe to return. We’ll worry about the dead body later. Details!

Lucy Beale’s death was one of the soap’s biggest whodunnit storylines. But viewers were even more shocked to learn Lucy’s killed was her 10-year-old brother Bobby.

After losing his temper with his sister, he hit her over he head with a jewellery box. But he didn’t realise he killed her. His adoptive mum Jane came along and moved Lucy’s body, leaving her in Walford Common.

For 10 months, no one knew who killed the 20-year-old Beale.

Whilst I know Lucy coming back is probably a bit far-fetched, let’s not forget EastEnders characters have faked their deaths and returned before.

Maybe the body was another victim from a totally different crime… and she comes back for revenge on Bobby for trying to kill her?

Jack Sugden died off-screen in 2009 from a heart attack, leaving his wife Diane and kids Victoria, Robert and Andy devastated.

When a character dies off-screen, I believe there is always a chance that they could come back. However I can’t think of a reason why Jack would keep away from his family for over a decade.

Perhaps he could appear in a dream sequence and guide Robert back to Aaron!

Katy was killed in an off-screen car crash back in 2017. Due to her shock death, her ex-boyfriend and father of their son, Joseph, went out to Portugal to bring his child back to Weatherfield.

But what if Katy didn’t die? As I said, with off-screen deaths, I think characters can be brought back (as long as the explanation isn’t completely out of the realms of possibility…).

Maybe Katy did what Kathy Beale in EastEnders did and faked her death to get away from someone?