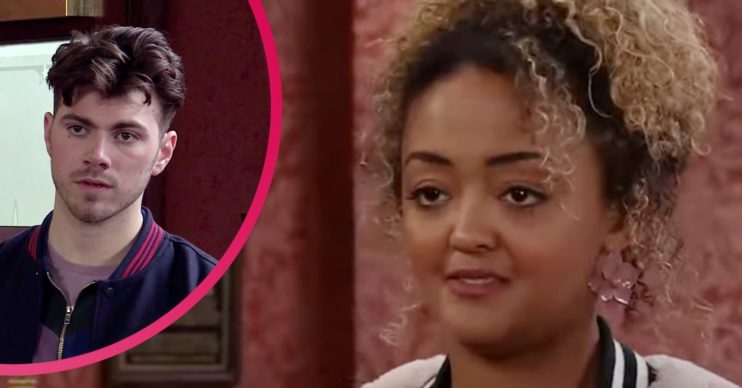 Curtis made his first appearance this week

Coronation Street fans fear that Emma could be in danger after meeting newcomer Curtis.

Earlier this week, Emma was thrilled when Curtis offered to help her take some barrels into the Rovers cellar.

Later Steve wasn’t impressed to see Emma and Curtis together, revealing Curtis was the guy who knocked him off his bike during the charity fundraiser.

In last night’s episodes (Wednesday, May 26) Steve called Curtis and the two met up.

He apologised for his behaviour and the two talked about the reasons for raising money for charity.

When Curtis revealed to Steve that he had a job interview at the Bistro, he and Emma offered to help him by giving him a mock interview.

During the mock interview, Emma asked Curtis where he saw himself in five years. The young man said he was studying to be a doctor and in five years time he will have just qualified.

He then went on to say it would be another 10 years if he wants to be a consultant cardiologist.

He added that hobby wise he wanted to win the Tour De France.

Curtis also said he wanted to get his work-life balance right and hoped in five years he would’ve found the love of his life and might even have a kid on the way.

Emma swooned and even Steve was unable to ignore the chemistry between the two. But fans are worried Curtis is too good to be true.

Wonder what nasty deeds corrie have in store for Curtis. No matter how normal he seems now, he’ll end up freaky. #Corrie

Hi @itvcorrie I know you like to make every newcomer a serial killer or a relative to a villain but PLS leave Curtis alone, let me drool over him thanks x #Corrie

Last year, Iain MacLeod teased a new love interest, saying she would get her wish to find her dream man. But it would be an “interesting version” of her wish.

Speaking to The Sun, he said: “There’s what I think will be a really brilliant storyline for Emma but I can’t talk about it in a lot of detail without giving it away.”

Read more: What happened to Jenny’s son Tom in Coronation Street? Who is Daisy’s dad?