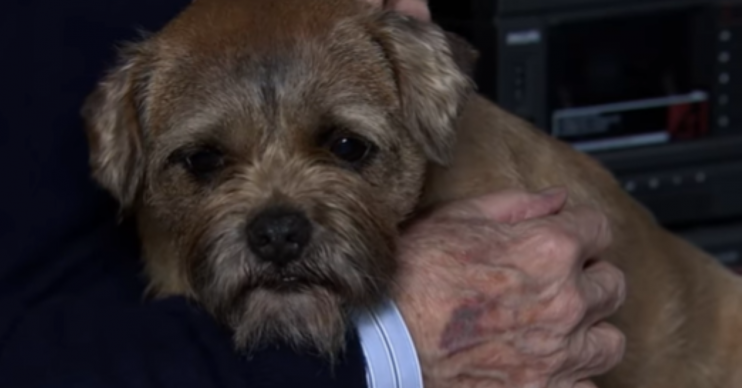 Coronation Street left an already stressed out nation heartbrokn last night as they aired the final scenes of Eccles the dog.

Ken’s pooch succumbed to an inoperable tumour in Wednesday night’s outing to Coronation Street (April 8) and was put to sleep.

As well as being devastated by the death, fans at home were also concerned what had become of the dog who played Eccles.

@Sharontweet I have not watched Corrie yet, but can see Eccles has passed, the pooch hasn’t died in real life has she? Heartbreaking

My wife wants to know has Eccles died in “real life”…?

However, Corrie has now confirmed the real life dogs (yes, there were two!) who played Eccles are alive and well!

It was poor Emma Brooker who had to make the decision to put the pooch to sleep as she was left looking after her.

Ken was on a day trip and Tracy and Steve had gone up to Scotland with Amy.

Sobbing Emma tried to call Ken, but got no response. She decided to let the vet operate, but he came out with very bad news.

“Unfortunately the tumour has spread to other organs – it’s impossible to remove. The growth is inoperable and it will only get worse,” he said.

“We could wake her up and she may live a few more days but those days would be spent in a lot of pain.

“The humane thing to do would be to not bring her round from an anaesthetic.”

Before Eccles was put down, Emma was in tears as she comforted the canine.

She told her: “Amy told me all about Granny Deirdre and Great Granny Blanche.

“You’re such a lucky dog to have had so many wonderful people in your life.”

Eccles came to Weatherfield when a friend of Deirdre Barlow’s mum Blanche Hunt (Maggie Jones) passed away and left the pup to her.

Corrie shared a tribute video on the soap’s Twitter account, which featured several scenes involving Eccles and Deirdre, who was played by the late, great Anne Kirkbride.

In the clip, Ken told Eccles: “I always think the best friendships have to be earned.

“All you ever wanted was my companionship, maybe the odd bit of bacon.

“This is not goodbye old girl, No, this is au revoir. Until we meet again.”

The clip concluded with a picture of Deirdre holding Eccles and the writing: “Lady Freckles aka ‘Eccles’, 2005 – 2020.”