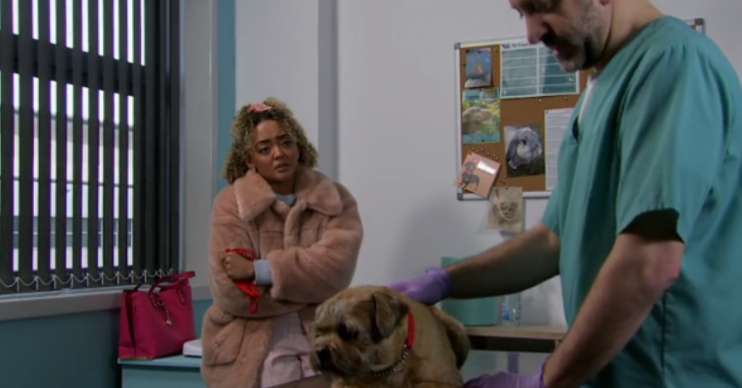 Eccles was a much-loved Weatherfield character

In last night’s Coronation Street episode (Wednesday, April 8), viewers were forced to say goodbye to Eccles the dog after 14 years. However, some viewers claims to have noticed an error regarding the dog’s death.

In the half-hour episode, Emma was left to look after Eccles and Steve’s pooch Rover.

But when Dev pointed out that Eccles didn’t look so good, Emma took him to see the vet.

The vet put the dog under to see what was happening and confirmed Eccles had a tumour which was inoperable.

As she couldn’t get a hold of Ken, Emma was given two options. Either she could decide for Eccles to not be woken up from the anaesthetic, or she could have the dog woken up.

However the vet warned that if Eccles was brought round, she would only live for a few more days and would be in pain.

Read More: Why is Coronation Street running dark storylines during the coronavirus pandemic?

When Ken, Tracy, Steve and Amy arrived at the vet, they were gutted to learn Eccles had died.

But some fans were questioned why the decision had been left to Emma and if the vet was actually allowed to put down a pet without the owner’s permission.

Vet wouldn’t have put her to sleep without the owner being there 🙄. Poor Emma though and poor Eccles 😢 #Corrie

I still don’t get how Emma was allowed to tell the vets to put Eccles to sleep. Surely they’d have to wait for the owner to decide? #Corrie

I would have thought they'd have waited for Ken and the others to turn up before putting Eccles to sleep though. So they could say goodbye. #Corrie #RIPEccles

Would a vet put down an animal without the owner present?

A vet has explained to ED! what would happen if the pet owner wasn’t there.

She said that he would ensure big decisions, such as having an animal put down, would ideally always be made by the animal’s immediate owner.

Vet wouldn’t have put her to sleep without the owner being there.

She also stated that if the owner can not be contacted, then a friend, carer or relative may be the designated decision maker.

However, in Eccle’s circumstances, where they were unable to get a hold of Ken, the vet would try to contact him in order to get confirmation first.

Dr Jessica May, lead vet at the video vet service FirstVet told us: “When an animal has a tumour or a lump, there are sometimes instances when it can’t be safely removed.

“If it becomes clear during the operation that the lump cannot be removed, then the surgeon will normally contact the owner during the procedure to discuss options and get consent for euthanasia where necessary.

“In Eccles’ case it may be that that the person accompanying her had full decision-making capacity in Ken’s absence.

Read More: Coronation Street star Shelley king says she has no plans to leave the soap as Yasmeen Nazir

“In these instances, though, this responsibility would ideally be accompanied by a written letter from the owner. Typically the vet would still try to contact the owner, or a relative, for confirmation first.”

Did you watch last night’s Corrie episode? Leave us a comment on our Facebook page @EntertainmentDailyFix and let us know what you think!