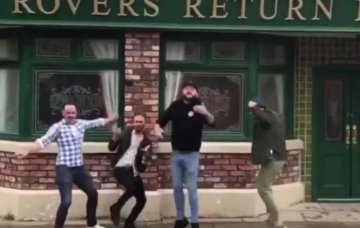 This will make your day!

Here’s something we thought we’d never see – EastEnders, Coronation Street and Emmerdale all in the same dance video.

The main three soaps have joined forces in a bid to show off their dance moves, and fans couldn’t be more delighted.

YouTube star Aaron Crascall is renowned for his videos that leave viewers smiling and has won himself a legion of fans thanks to his random comedy antics, and in his latest video he’s visited the sets of three soaps to film cast having a dance-off.

Inside the Woolpack, Aaron was joined by and Ash Palmisciano (Matty Barton) and Michelle Hardwick (Vanessa Woodfield), as well as other fun-loving members of the Emmerdale cast.

Actor Ross Adams, who is best known for playing Hollyoaks’ Scott Drinkwell, even commented on the video, challenging Aaron to go to Chester next to see what their dancing is like…

Which soap do you think has the best moves? Leave us a comment on our Facebook page @EntertainmentDailyFix and let us know what you think!