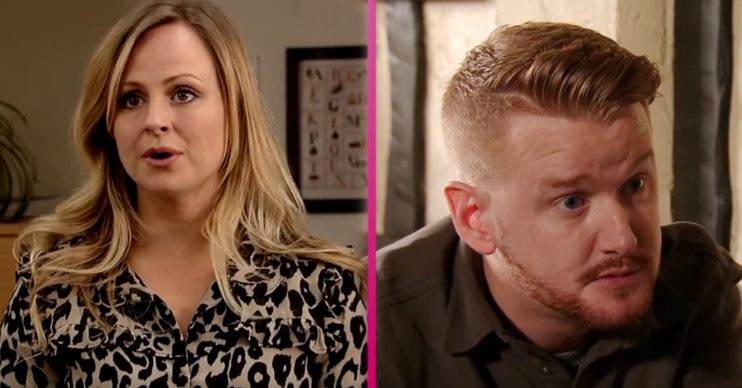 Coronation Street aired the aftermath of Gary being run over tonight. But will Sarah tell the police about Gary killing Rick?

In Wednesday’s episode (July 29), Sarah discovered Gary killed the loan shark. As she rushed off to call the police, she ran into the path of an oncoming car.

However, Gary, who had been chasing her, was able to push her out of the way just in time, but he took the full force of the vehicle.

In tonight’s visit to the cobbles (Friday, July 31), Gary is taken to the hospital.

Meanwhile, Tyrone told Maria and Adam that he saw Sarah running away from Gary, just before he got run over.

Read More: Coronation Street: Debbie Webster coming back to cause trouble for Kevin and Abi

While she plays it off as a coincidence, the big question remains…

In next week’s episodes, it looks like Sarah decides to keep the truth to herself.

Sarah pays Gary a visit in hospital and he begs her not to go to the cops about what she’s learnt.

Sarah’s husband Adam later quizzes her on why she paid her ex-boyfriend a visit. But she’s saved when the police turn up to ask questions about the accident.

However she quickly becomes stressed when they ask why she dialled 999 before the accident. Will she tell them the truth?

Meanwhile, having discharged himself from the hospital, Gary puts some clothes in a holdall. He leaves letters for Izzy, Maria and Nicola.

Adam becomes even more suspicious when Bernie tells him about the watch Sarah bought off her as a present for him.

Later, the solicitor tries to make peace with Sarah promising not to mention Gary or the accident from now on.

Despite packing his bags, it looks like Gary will be sticking around for a bit longer as he announces later in the week he won’t be increasing the factory rent price.

Sarah’s suspicious but Gary insists it’s not a bribe.

Meanwhile, when Maria confides in Peter and Carla that the furniture business is slow at the moment, Carla lets slip Gary binned his threat of a rent increase, leaving Maria worried.

Adam finds out about Gary’s change of heart from Peter. But Maria confronts Gary, asking if he’s still in love with Sarah.

Gary insists to Maria he’s just trying to take the pressure off Nick, as he’s having such a tough time with Oliver.

Maria gives him a hug, unaware of what’s really going on.

Later, Adam asks Sarah about her day. But when she fails to mention the factory rent, Adam quietly seethes.

Will Sarah tell Adam the truth?