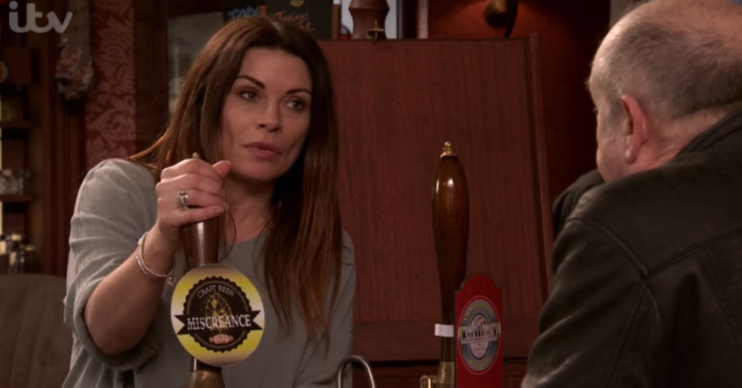 This week, Geoff returned from the hospital after being stabbed by wife Yasmeen. However viewers know Geoff has been abusing Yasmeen and she stabbed him in self-defence, as he had threatened to kill her.

Whilst Yasmeen is in prison, Geoff has been making out he was the victim of abuse. Meanwhile, Yasmeen’s granddaughter Alya has been letting people know that Geoff is the bad one.

In the night’s episode, the radio DJ made his way into the Rovers which is being temporarily run by Carla Connor.

As he ordered his drinks, he noticed Alya talking to his daughter-in-law Sally. But as Alya left, he turned his attention back to Carla.

When she asked if he wanted anything else, he responded saying: “A smile wouldn’t hurt.”

Carla responded by sarcastically smiling, however it was clear she’s no fan of Geoff.

Viewers cheered on Carla and told the nasty character he had messed with the wrong woman.

Love that Carla is cold towards Geoff! She knows a bad one when she sees one #Corrie

Lol at Vile Geoff trying to make Carla Connor all subservient – I think you picked the wrong lady !!! 👀😬 #Corrie

i am SO glad the woman of the street all seem to be onto geoff.. carla, eileen, cathy, sally, evelyn.. woman solidarity👏🏼 #corrie

Does Carla see Geoff for what he really is?

Coronation Street: Does Carla know about Geoff’s abuse of Yasmeen?

While Carla isn’t directly involved with the storyline, she has heard what happened with Geoff and Yasmeen.

For a while, she worked with Alya at Underworld and judging by her hostility towards Geoff, she doesn’t seem to like him.

Could she be another one of the Weatherfield residents to see Geoff’s true colours? Could she actually engineer his downfall?

Who else doesn’t trust Geoff?

It isn’t just Carla who appears not to trust Geoff. His own daughter-in-law seems to be having doubts about his side of the story.

After Geoff’s interaction with Carla, he tried to make conversation with Cathy and Brian. However Cathy also appears to no trust the radio DJ.

Next week, Tim’s pal Eileen says she isn’t sure about Geoff’s side of things. Tim then starts to wonder about his dad’s protestation of innocence. Could he finally start to see his dad’s true colours?

With all these people starting to doubt Geoff’s story, will one of them get the evidence they need to expose him?

Who will be the one to expose Geoff? Leave us a comment on our Facebook page @EntertainmentDailyFix and let us know what you think!