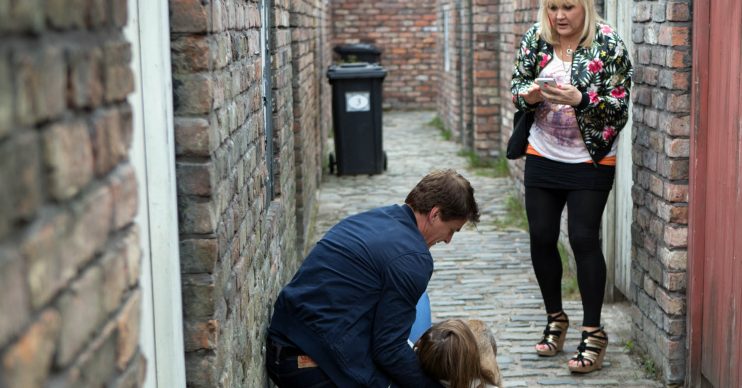 What would you call this?

Coronation Street has sparked a fierce debate on social media after they posted a picture of the infamous cobbles ‘ginnel’.

The show posted a tweet confirming that the alleyway behind the infamous Coronation Street houses is “definitely a ginnel.”

But the post generated hundreds of comments as people disagreed!

What would you call the Coronation Street ginnel?

While many said that of course it was a ginnel, others thought the show had gone completely bonkers!

Another added: “It’s an alley,” with a third saying it is more specifically a “back alley”.

Someone else insisted it was “an entry”, and a “gully”, a “snicket” and a “jennel” were also offered up.

Wow, who knew it was so controversial!

The ginnel (jitty/alley/entry/gully/snicket/jennel) is behind the houses on the cobbles.

Each house has a back gate out from their yards that leads to the ‘ginnel’, which then goes out on to the street.

The area has been used throughout Corrie history in some pretty major storylines.

And it’s always been called a ginnel!

Secret liaisons and lots of affairs

The ginnel is the perfect place to conduct secret affairs and things you don’t want others to know about.

Daniel Osbourne had a lot of storylines in the ginnel last year!

When his wife Sinead lay dying of cancer, he was comforted by Bethany in the ginnel and they ended up kissing.

Sinead later found out and kicked him out, leaving a drunk and destructive Daniel to wallow in self-pity in, you guessed it, the ginnel!

Plenty of people have also been found collapsed in the ginnel, including Tracy McDonald from kidney failure.

Jason Grimshaw was also beaten up there, and so was Shona Platt.

Serial killer John Stape also used the handy passageway to dispose of Colin Fishwick’s body when he left his friend to die.

Affairs conducted out there include Fiz Stape and Tyrone Dobbs, when he was with abusive ex Kirsty, and Aidan Connor and Maria Connor’s illicit romance behind the back of his fiancée Eva Price.

So what would you call the ginnel?