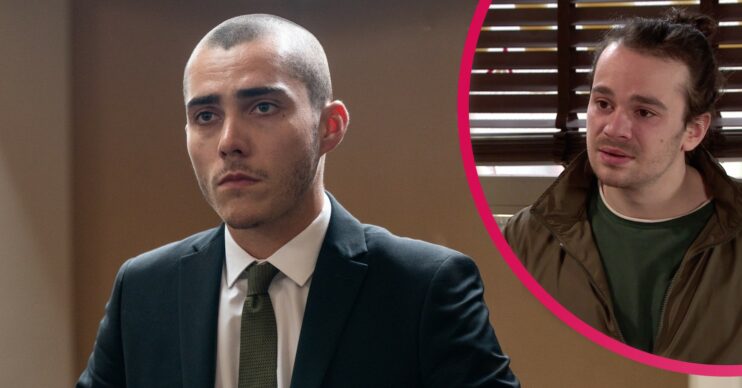 After the attack, a witness claimed to see Corey changing clothes before chucking his bag in the river. However the bag was never found.

Later Seb died from his injuries.

At the trial, Kelly was found guilty of murder, but Corey was found not guilty.

In pictures obtained by Metro.co.uk, Maximus could be seen filming scenes with another actor who is playing a busker.

Corey appears to be having an argument with the busker and in another photo, the busker is showing Corey something on his phone, but what is it?

Photos also reveal Corey has scratches and cuts on his face, however it is unclear what’s happened to him at this stage.

According to the publication, the busker reveals themselves as a witness who clocked him getting rid of the incriminating backpack on the night of the attack.

Having discovered the busker knows something that could put him in prison, will Corey kill again to hide what he did?

After the court verdict, actress Sally Carman, who plays Seb’s mother Abi revealed her character will leave the cobbles but return for revenge.

Teasing what’s to come, Sally told Entertainment Daily and other media: “It’s lifechanging and all of those things.

“But it’s like she’s being driven by a force she can’t stop and it’s slightly out of her hands as well because she has to do what she’s going to do.”

It was also revealed that Abi will return for revenge for a big week in October.