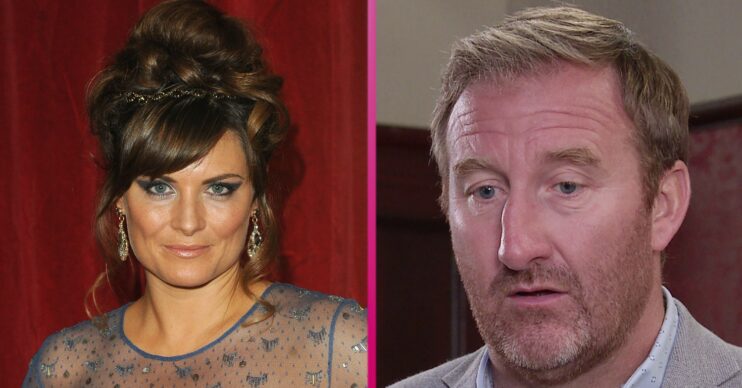 Sounds like there's more trouble coming for Phill and Fiz

Louise famously played Chrissie White in Emmerdale from 2014 until 2018.

Now it’s been reported she will be joining Corrie to ’cause chaos’ for Fiz and Phill.

According to The Sun, Louise will be joining Coronation Street for a series of episodes which will air over the summer.

A source told the publication: “Phill’s ex-wife will make herself known on the cobbles in the coming weeks.

“She is set to cause chaos as Fiz and Phill’s wedding gets closer.

“But what does she want? And will Fiz be able to deal with both Camilla and future mother-in-law Mimi misbehaving?”

Who did Louise Marwood play in Emmerdale? Who is Chrissie White?

Louise played a character called Fiona Heath in Emmerdale in 2010 before she was cast as Chrissie in 2014.

She quickly realised Robert had a life in Emmerdale before meeting her.

Robert went on to have an affair with Aaron Dingle.

However Robert ended up having a one-night stand with Chrissie’s sister, Rebecca, which resulted in Rebecca falling pregnant and giving birth to a son, who she called Sebastian.

What happened to Chrissie White?

Towards the end of 2017 Lawrence made plans to move to Australia with Chrissie, Rebecca, Lachlan and baby Seb.

As they were about to head off, Robert kidnapped Seb while Robert’s sister Victoria acted as a distraction.

Robert took off in his car with Seb and soon Rebecca, Lawrence, Chrissie and Lachlan realised what happened and chased after him.

Chrissie was driving the car and Lachlan, who was struggling after Chrissie convinced Belle to break up with him and had suicidal thoughts, was in the passenger seat.

He grabbed the steering wheel and drove into the path of an oncoming lorry.

Chrissie and Lawrence died in the crash, Rebecca had serious head injuries and Lachlan survived.

However he went on to kill his best friend Gerry and kidnap Rebecca. He is currently in prison.