It looks like Adam Barlow and Sarah Platt will be having their nuptials soon!

The cast of Coronation Street have been spotted filming Sarah Platt and Adam Barlow’s wedding scenes.

In pictures obtained by Metro.co.uk, Sam Robertson, who plays Adam, and Tina O’Brien, who plays Sarah, can be seen at the wedding venue.

It looks like it will be a celebration for the whole street as other cast members such as Alison King, who plays Carla Connor, Elle Mulvaney, who plays Amy Barlow, Kate Ford who plays Tracy McDonald, Lisa George, who plays Beth Tinker, Rula Lenska, who plays Claudia Colby and Simon Gregson, who plays Steve McDonald were reported to be in attendance.

Sarah has opted for a 1920s style dress and judging by the pictures, she looks stunning!

Will Sarah finally have a drama-free wedding, or will things go wrong for her and Adam?

Adam proposed to Sarah during the Christmas seige, which saw Derek Milligan shoot Robert Preston, who died from his injuries, and David’s wife Shona, who is still in a coma.

Although Adam worried Sarah only agreed to marry him due to their life or death situation, she later agreed to his second proposal.

It remains to be seen whether the wedding goes smoothly, but show boss Iain MacLeod hinted Adam and Gary’s feud will be revisited.

He told Metro.co.uk: “Adam Barlow is secretly conspiring against [Gary] and will threaten to lead Adam and therefore the authorities to Ricky’s final resting place. 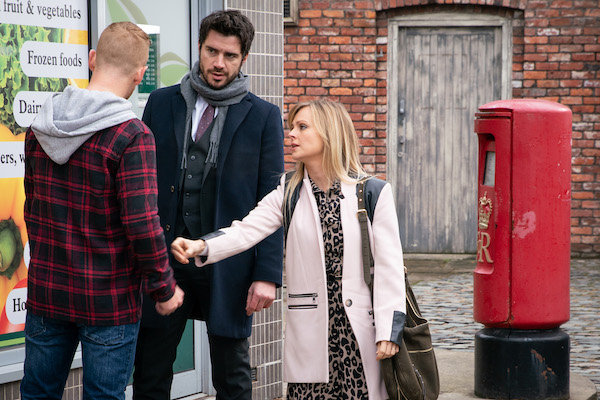 “Whether that will actually happen or not is still to be seen, but ultimately that will precipitate a big explosive story around the time we traditionally do our Britain’s Got Talent strip week.”

Are you looking forward to Adam and Sarah’s wedding?