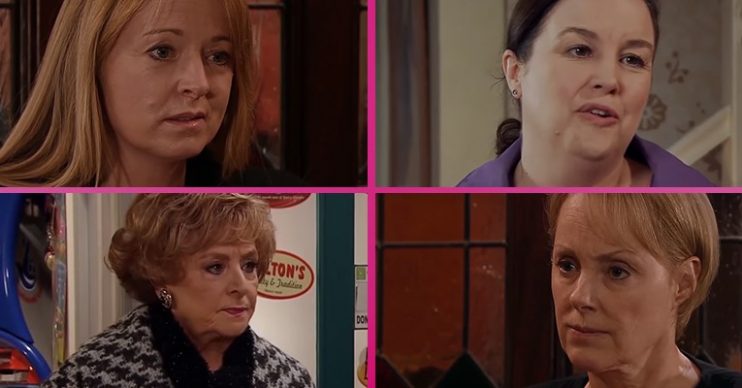 The cast have been filming on a coach

It looks like there could be trouble ahead in 2020 as the Coronation Street cast have been spotted filming an accident involving a coach in Blackpool.

Fans of the show know Rita has never had any luck when it comes to transportation in Blackpool and it looks like next year will be no different.

Over the last few weeks, viewers have seen Rita struggling with loneliness this Christmas as all of her friends have plans with their family.

And disaster will soon strike when she is decorating her Christmas tree and it falls on her leaving her trapped.

But it looks like her friends will soon realise how Rita has been feeling and they will take her Blackpool as a treat.

A source told the publication: “Rita finds herself grappling to get a coach stopped as it heads out of control on a fun day trip to Blackpool.

In the pictures, Rita can be seen trying to keep calm, whilst Sean looks like he’s running to show the paramedics where the injured are.

Over the weekend, Coronation Street’s official Instagram page hinted at the upcoming scenes when they shared a Saturday sneak peek of the actors filming on a coach.

The post was captioned “Happy #SaturdaySneakPeek everyone! Any idea what Rita, Jenny, Sally and Mary are doing on a coach!? #Corrie #Exclusive #FirstLook.”

Fans of the show know this isn’t the first time Rita has had an accident in Blackpool.

An ambulance is called as Sean makes a dash to the paramedics who make their way to the injured.

Back in 1989, whilst running away from abusive partner Alan Bradley, Jenny’s father, she was almost hit by a tram.

She ran across the tramline and whilst she narrowly avoided being hit, Alan was struck and killed.

Will they all leave Blackpool unharmed this time?