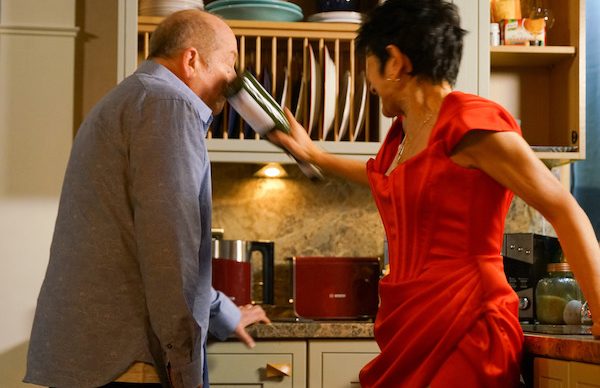 Weatherfield should be asking Carla to pick their lottery numbers

In Friday night’s episode Yasmeen was forced to defend herself against Geoff when he attacked her with a knife.

She smashed him over the head with it and then stabbed him in the neck with the broken bottle to get him to stop his ceaseless abuse.

But one scene had fans convinced Carla is psychic after she complimented Yasmeen’s ‘killer dress’.

Viewers know that Geoff forced Yasmeen to wear the dress he had bought for a prostitute out in public for a dinner, leaving her humiliated.

She was forced to wear it to the Rovers and Carla tried to boost her confidence by paying her the compliment.

“Ooh killer dress, Yasmeen,” Carla said as she walked to the bar.

Fans are convinced it was foreshadowing of Yasmeen clonking abusive Geoff around the head and stabbing him in the next with a broken wine bottle.

One said: “Carla said ‘killer dress Yasmeen’ to Yasmeen in the rovers and then she literally attempted to kill him hours later in the dress #corrie Clever script writing!”

What did Yasmeen do?

Grabbing a knife, he added: “Maybe I should kill you – do the world a favour.”

In her haze and hearing nothing but abuse and threats, Yasmeen grasped for a wine bottle and stopped him leaving him for dead.