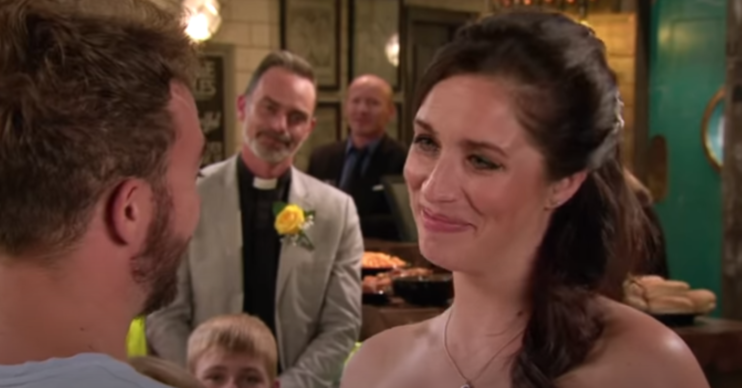 Shona and David married last year, before she lost her memory

Coronation Street bosses have teased a second wedding for David and Shona.

On Christmas Day Shona was shot and although she initially seemed okay, she went into a coma. When she woke up, she could no longer remember her husband David.

She was sent to a rehabilitation centre in Leeds, but stated she no longer wanted to see David. Later, she asked for a divorce.

Read More: Coronation Street SPOILERS: Geoff and Yasmeen abuse storyline to continue until the end of the year

However it seems like things will start to get better for the two and it looks like there could be a second wedding on the cards.

Speaking at a virtual press event, Corrie boss Iain McLeod said: “They work best as sparky and funny so there will be comedy but her feelings are absent and there’s no emotional attachment – it will be a bumpy road.

“But she’s also a different proposition too so he also has to fall back in love with her. Nobody has a long term desire to split them up so they will have a happy ending.

“They’re like cheese and crackers – none are good without the other. But it’s a very unique and emotionally complicated story.”

Discussing the idea of another wedding for David and Shona, Iain said: “It’s certainly been discussed – that’s the most poignant thing about it. To Shona the wedding pictures she has been shown are just two strangers dancing in The Bistro.

Before the UK coronavirus lockdown, back in February it was was confirmed Shona actress Julia Goulding was back filming at the soap.

A recent soap teaser revealed Shona will be returning to screens soon. In the clips, she can be seen in a car arriving back on the cobbles.

But in another shot she’s gone to visit criminal son Clayton in prison. However, she ends up walking away in tears as a guard holds Clayton back.

Later she’s sat down and it looks like Gail is sat behind her. Will she finally start to regain her memories?