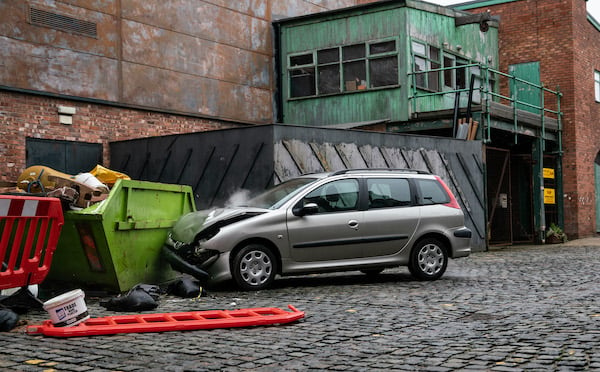 Coronation Street boss Iain MacLeod has revealed the soap are planning a huge car stunt. But under new rules it will all be filmed at a social distance.

During a virtual press conference with ED! and other media, Iain explained how things have changed for the soap now they have returned to filming.

But he said they are doing all they can to keep up a high octane pace, including a killer car crash.

Iain firstly revealed the soap are doing all they can to keep social distancing in place and how they intend to “normalise” the two metre distance rule on screen.

“If two people who don’t live together run into each other in the street you will definitely notice and the directors have been asked to highlight that they are two metres away from each other,” he said.

However, he went on to say there are other challenges the soap is facing. He revealed there have been instances that have been “quite tricky” for them.

“We are embarking on our first post-pandemic stunt fairly quickly after we return, which is a car stunt, and it’s brilliant.

“It’s two people in killer jeopardy. It will look like they are right on top of each other and touching each other, but in fact it’s going to be shot with nobody going within two metres of each other at all.

“There’s a lot of thought going on right now as to how you achieve that mind-bendingly difficult thing.

“There will be cheating there, for example, where we make it look like character A is in front of a vehicle and is perhaps knocked out of the way by character B, but in fact there will be no proximity between the performers or stunt performers at all.”

One storyline pushed back

He also revealed one big story has had to be pushed back for now due to filming constraints.

“Rather than do a half-cooked version of it because it required a location, we opted to push the big centrepiece of the drama from that week and do it later in the year at a time when we can do it full beams later in the year rather than a compromised version in the first couple of weeks back when we wouldn’t have had time to get all the infastructure ready to do that.”

The soap returned to filming on Tuesday (June 9) and has implemented strict measures to make sure everyone remains safe.

Anyone entering the building must have their temperature taken on arrival. If it’s high they are sent home to take a coronavirus test.

During the press conference, Head of Continuing Drama at ITV, John Whiston said it felt “unnatural” at work.

He said all communal areas are taped off and people are hanging out in the cars between takes.

He admitted it’s not a natural way to deal with your colleagues.