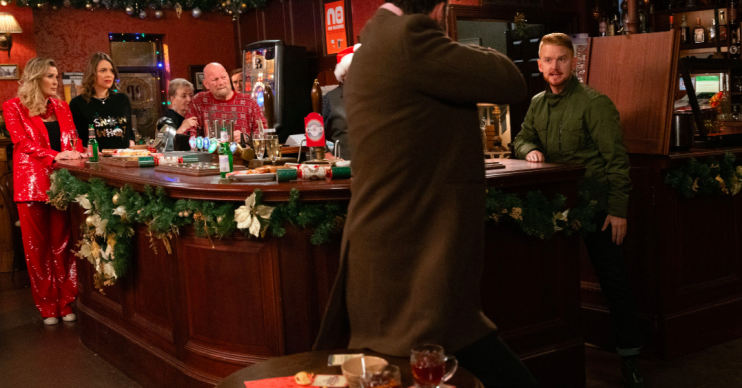 At least one Weatherfield resident will be killed

At Christmas a rifle-carrying Derek Milligan will fight with Gary Windass and leave at least one cobbles resident dead.

But after years of criticism for dark criminal plots from viewers, boss Iain has defended the decision to include more guns on the Street.

Speaking at a recent press day, he told Metro: “I’m aware that the presence of firearms on the Street is a controversial one – it isn’t a decision we took lightly but I just felt there was an interesting side avenue to what Gary had been doing that hadn’t been explored yet.

“Doing something involving firearms would provide a realistic and truthful pay off to the story about loan sharking and the pressures of poverty and the mental collapse that can cause.”

He added: “It felt motivated and exciting. We wanted to subvert people’s expectations about what they might expect from a Corrie Christmas. While there’s bags of warmth and family nonsense, there’s also that edge of the seat final reel.”

He said there’s a “view that Coronation Street should embrace firearms at its peril”.

Iain said the soap and Britain “equally has to be cautious about how it portrays violence and not just be seen to be sensationalising it I guess”.

Reports have claimed Robert Preston will die in the shooting as a fight breaks out between Gary and Derek while they battle over the loaded gun.

Newer reports also claim Shona Platt will be shot and left in a coma in the scuffle.

Confirming the news of a death, Iain added that “on other soaps a Christmas Day death is relatively commonplace but less so on Coronation Street but again, anything like that is a tough decision”.

He said killing any character is “rough” and he’s “always conscious of the actor and human being who plays that part”.

What do you think about guns on the cobbles – is it too much? Leave us a comment on our Facebook page @EntertainmentDailyFix and let us know what you think!