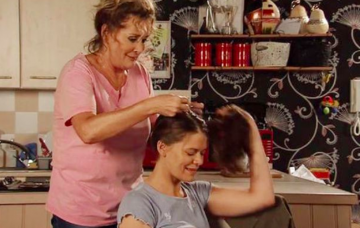 Viewers have watched as Hannah has pretended to be the McDonalds’ daughter with the help of Liz’s ex-husband Jim.

Part of the ruse was for Jim to convince Liz that the baby they buried didn’t have Katie’s birthmark behind her ear.

The birthmark being on Hannah’s neck was part of the so-called proof used on Liz before Jim produced a DNA test.

However after such a song and dance was made about the birth mark earlier in the week, by Friday it had gone.

In last night’s episodes Liz decided she was going to buy her ‘daughter’ something to try to make up for all the missed birthdays.

Giving her a touching necklace, Hannah asked Liz to put it on her.

But when she pulled her hair back, Liz didn’t seem to notice that Hannah’s birthmark had mysteriously vanished.

Liz may have missed it but viewers certainly didn’t.

One wrote: “Oh Liz! Wake up and smell the non-existant birth mark! #Corrie”

A second added: “The birth mark is missing from behind her ear. #Corrie”

However this could be the beginning of the end for Jim and Hannah’s sick scheme.

One viewer pointed out: “#Corrie… the birthmark not visible tonight… continuity error, or deliberate?

“Surely someone that scheming wouldn’t make such a mistake?”

Viewers have become enraged at Jim’s heartbreaking scam and have even called for him to be murdered.

Actress Beverley Callard has admitted that Liz is so desperate to believe that Hannah really is Katie that she isn’t thinking straight.

She told The Sun Online: “Liz is so vulnerable at the moment and has been through such a bad time and she’s working with hideous Johnny and Jenny so she just wants some happiness somewhere and I think she really wants it to be true.

“She’s very vulnerable but also because of what happened with Michelle and her boys, she thinks well it happened to them so it could happen to me and I think she’s clinging onto that.”