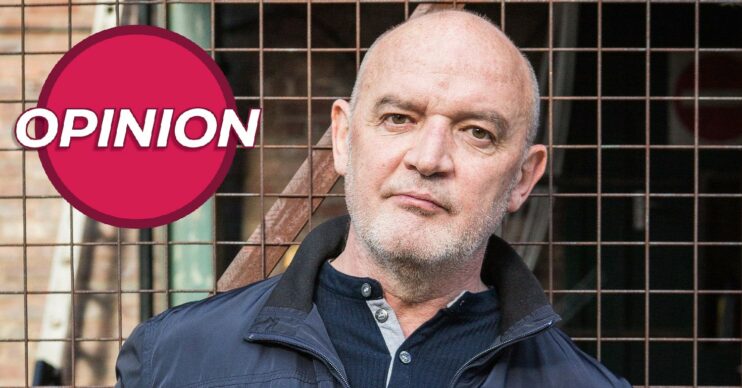 OPINION: Coronation Street: Come back Phelan, all is forgiven!

Weatherfield needs to be stalked by a killer again

Coronation Street has a problem and a big fat Pat Phelan-shaped hole in the middle of its plots.

Like most viewers we were getting a bit fed up of the psychotic builder’s reign of terror back in 2018, but if recent months on the cobbles are anything to go by we were wrong!

We take back everything bad we ever said about Phelan.

He needs to return – or someone like him – and it needs to happen quickly!

While viewers may be enjoying the low stakes drama, issue-based stories and the comedy scenes, Corrie has always been a mix and it needs some darkness.

It’s time to face facts – Weatherfield is in need of another serial killer.

Like Pat Phelan and Richard Hillman before him, nothing revitalises a show like a serial killer offing the deadwood left, right and centre.

We need to be yelling at our TV screens at the unsuspecting cobbles residents who haven’t joined the dots that one of their neighbours is a killer.

Admittedly, Geoff Metcalfe did a good job of replacing Phelan as the show’s resident villain back in 2020.

But since then? Nothing.

Not one single person comes close to Pat and Geoff and that needs to change.

Who was Pat Phelan in Coronation Street?

Bully boy builder Pat first came on the scene in 2013 when he blackmailed Anna Windass into sleeping him to protect her son, Gary Windass, from a prison sentence after he assaulted Phelan.

He returned in 2016 under the guise of being a changed man trying to get his life back on track.

He shacked up with Eileen, but it soon became clear he was still dodgy when he planned to sell a load of bogus flats. It all went wrong when his business partner, Vinny Ashford, ran off with the money.

But Phelan was getting darker by the day.

In a final showdown with Eileen when his crimes came to light, he fell into the sea and was thought to have perished.

But he came back.

He held the bistro at gunpoint on Michelle and Robert’s wedding day, shooting the bride, and eventually Anna Windass stabbed him to death.

Anna watched as he died, telling him she had won at last.

And although we saw his body zipped up and taken away in an ambulance – was he really dead?

His ashes popped up in a storyline a while ago, and were supposedly gotten rid of by Todd, but we don’t trust that man as far as we could throw him!

All of this could be explained away.

Phelan had enough contacts to have paid a private ambulance company to remove his body in the event of his rampage going wrong.

He could have been in cahoots with the funeral parlour to pretend the ashes were his.

Now wouldn’t that be a storyline?

The possibilities for juicy storylines surrounding a Phelan comeback are endless.

Anna Windass should return too!

And surely it’s time for an Anna Windass comeback?

Her son, Gary, is hiding his own secrets as a killer, while bringing up his victim’s daughter!

And Anna’s daughter, Faye, is facing a devastating struggle as she deals with an early menopause diagnosis.

Her family needs her.

And if Phelan comes back, the cobbles are going to need her too!

Read more: When is Coronation Street on this week?

Is there already a serial killer on the Street?

However, if all this is a bit far-fetched and they’re looking for someone already on the cobbles to turn dark instead, they really need to look no further than Daniel Osbourne.

Letting Daniel embrace his darkness would be a chilling way to add tension to the soap.

Instead of a serial killer being an interloper who arrives on the cobbles and then sets about their bad deeds – Daniel would be different.

He is Ken Barlow’s son. He is the apple of Ken’s eye (even after he tried to kill him).

Journalist, teacher, love rat – he ticks every box Ken did.

The darkness is definitely there.

So it’s time now to let him embrace it. Kill a few people. Sink to new lows. Revel in the kills like Meena did in Emmerdale.

And then let it explode the first family of the cobbles.

There’s drama just waiting to happen there, if only Corrie bosses are brave enough to do it.