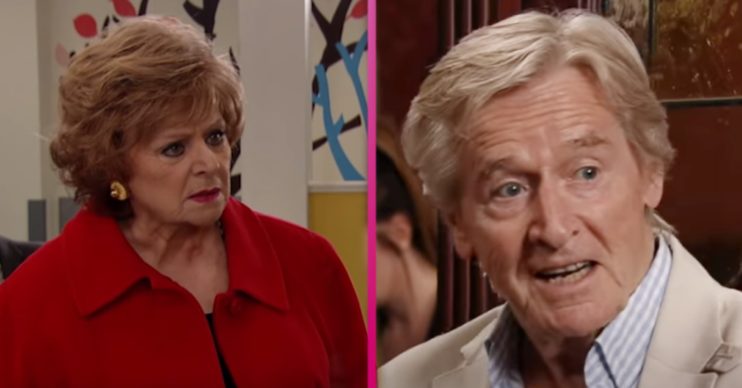 Barbara and William have been off work since March

Coronation Street stars Barbara Knox and William Roache have returned to filming at the ITV soap.

The news was confirmed on the soap’s Twitter page earlier today (Thursday, October 8). A picture was shared of the two actors filming a scene, with social distancing measures still in place.

Alongside the picture, a tweet read: “Here’s some good news to put a smile on your faces! Coronation Street legends William Roach and Barbara Knox are back filming on the cobbles this week!

“Who’s excited to see their return ahead of our 60th anniversary celebrations?”

Here's some good news to put a smile on your faces! Coronation Street legends William Roache and Barbara Knox are back filming on the cobbles this week!

Who's excited to see their return ahead of our 60th Anniversary celebrations? #Ken #Rita #Corrie @itv | @WeAreSTV pic.twitter.com/rluShe2TWu

In a recent chat with Entertainment Daily and other media, Sally Ann Matthews, who plays Jenny Connor, spoke about seeing Barbara back at work.

She said: “I was absolutely thrilled to see Barbara today.”

“I saw her at the top of the stairs and we did a virtual hug. But I told her how everyone on Twitter has been asking how she is and she went, ‘Do you mean strangers have been asking about me?’ I went, ‘Yes Barbara, yes Barbara, people think about you.’

“She was thrilled to bits, that meant the world to her.”

Back in March production stopped on Coronation Street and Emmerdale due to the coronavirus pandemic.

I was absolutely thrilled to see Barbara today.

Although filming resumed on Corrie in June, actors over the age of 70, child actors and those with health issues did not return to work.

Barbara and William’s return follow Helen Worth and Maureen Lipman, who also recently come back to the show.

It has also appears that child actors can now return to work.

Last week, young actors Isabella and William Flanagan, who plays Hope Stape and Joseph Brown, went back to the set of the ITV soap.

Are you looking forward to seeing Rita and Ken again? Leave us a comment on our Facebook page @EntertainmentDailyFix and let us know what you think of this story