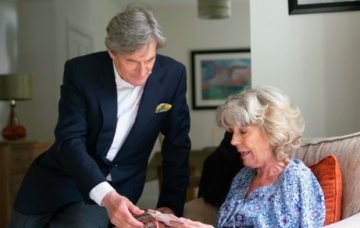 Audrey is playing with fire with the conman

Coronation Street star Sue Nicholls has revealed that Audrey Roberts is willing to risk losing her daughter and destroying her family for a last shot at love.

The actress plays hairdresser Audrey in the ITV soap and has opened up about Audrey lying to Gail about reuniting with conman Lewis.

Lewis (Nigel Havers) famously conned Gail out of £40,000 but last week viewers saw him return the money to an astonished Gail.

Promising that he had reformed, Lewis contacted Audrey to explain how he will be released from prison next week and wants to make a go of things.

And when Audrey agrees, she lies to her family and tells them she is going on a cruise to buy herself some time with Lewis alone.

Read more: Sean’s secret is out and 5 other Corrie spoilers for next week

But instead she stays at home for a romantic staycation with the man who cheated on her with her own daughter and swindled them both tens of thousands of pounds.

However Sue has now revealed that it’s Audrey’s last chance for love and so Gail will have to like it or lump it.

Sue said: “She will always wonder if she doesn’t do this.

“She is 78 and she might not get another chance at love so she can’t think about their opinion.

“She also thinks that yes it might go wrong but if it does she is no worse off and actually it might all work out.”

“It is after that when they ‘kidnap’ her. So she is just fed up with them treating her like she is daft and doesn’t know what she is doing.”

And Audrey has strong feelings about Gail’s behaviour.

Sue said: “Gail always harps on about what Lewis did to her and I have thought about it and really nobody else has ever appreciated that when the kerfuffle happened years ago Gail knew that Audrey was having a relationship with him and they were together and it was actually quite a serious affair.

“He might have done wrong to Gail but Audrey was wronged by both of them and hurt most so Gail shouldn’t really have the moral high ground on this one.

“Maybe Audrey should tell her one day, that might come.”

Do you think Audrey is going to get burned by Lewis and lose her daughter? Let us know what you think by leaving us a comment on our Facebook page @EntertainmentDailyFix!