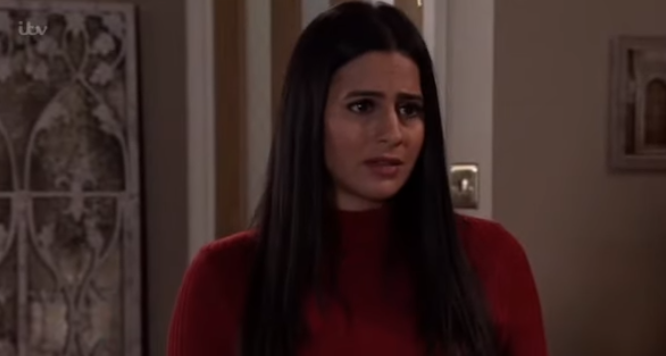 Will she pay with her life for trying to expose Yasmeen's husband?

Coronation Street fans are convinced that Alya Nazir is a “dead woman walking” after noticing a sinister link between her storyline and previous soap deaths.

Viewers know that Alya has been secretly looking into the past of her grandmother Yasmeen’s husband Geoff Metcalfe.

Ayla is starting to remind me of Tina and Katie on Emmerdale.

The Speed Daal owner suspects – quite rightly – that Geoff is a wrong’un and that he’s emotionally abusing Yasmeen.

However, her latest discovery caused even more horror for Yasmeen when Geoff realised what had been going on and made Yasmeen pay.

Read more: Coronation Street jokes about a Real Housewives of Weatherfield spin off

On Wednesday (March 18), Alya looked into Geoff’s past, and turned up some incriminating evidence during an online search.

Namely, that he and a past girlfriend had been charged with causing an affray.

When Geoff was out of the house, Alya headed round to discuss her discovery with Yasmeen and begged her to stay in Weatherfield and not leave for Cyprus.

After Alya left and Geoff returned, Yasmeen meekly questioned her husband about the fight he’d had with someone by the name of Jocelyn.

But as soon as Geoff realised Alya had been in the house, he angrily swept Yasmeen’s plate of curry from the table, sending it straight on to the floor.

So terrified of him, a desperate Yasmeen fell to her knees and started to eat the curry.

Fans are now concerned that Alya’s continued investigations into her stepgrandad will have dire consequences.

Writing on Digital Spy Forums, one fan suggested Alya would DIE after noticing a similarity to Tina McIntyre’s storyline, as well as Katie Sugden’s in Emmerdale.

They wrote: “Ayla is starting to remind me of Tina and Katie on Emmerdale, who both spent their final days trying to expose Rob and Robert’s misdeeds which eventually led to their deaths.

“I feel like Alya is headed down a similar path with Geoff, I think it’s only a matter of time before he kills her.”

Another agreed, writing: “From the way this story is going I just don’t see Alya coming out of this alive.”

Another post read: “Alya is just giving me vibes of Tina in her final days.”

Soap fans will know that Tina McIntyre – played by Michelle Keegan – was murdered by Weatherfield businessman Rob Donovan after she discovered some uncomfortable truths about him.

Dodgy Rob pushed the Rovers Return barmaid to her death after Tina threatened to go to the police.

Tina plunged to the cobbles after being knocked over the edge of scaffolding on the builders’ yard balcony.

Meanwhile, Katie Sugden was pushed to her death by Robert Sugden.

She became more and more obsessed with him and went to great lengths to prove he was up to something shady.

Katie died in February 2015 when she fell through the floorboards after being pushed by her brother-in-law and ex-lover Robert.

Does the same fate await Alya?

The next episode of Coronation Street airs on Friday at 7.30pm.

How do you want this plot to end? Leave us a comment on our Facebook page @EntertainmentDailyFix and let us know what you think!