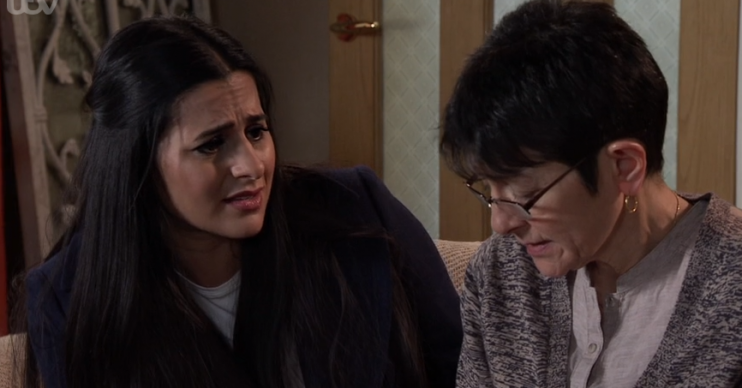 She reports Geoff to the police

Alya Nazir is determined to ‘save’ Yasmeen from Geoff Metcalfe in Coronation Street – but her actions end up putting her grandmother in danger instead.

Viewers know that Geoff is a controlling bully, who belittles his wife and torments her behind closed doors.

Read more: Coronation Street ‘could be cut to two episodes a week over coronavirus’

His most vile deeds have included taking away Yasmeen’s credit cards and spending all her money himself, locking her in a box even though she’s claustrophic and forcing her to eat her own pet chicken.

Hundreds of fans have complained to Ofcom about the disturbing storylines, and others have vowed to stop watching the ITV soap until the plot ends.

While all of his manipulation occurs in secret, behind closed doors, Yasmeen’s granddaughter Alya has long suspected that Geoff’s a nasty piece of work.

This week, Alya acts on her suspicions and reports Geoff to the police.

That backfires quite dramatically with potential dangerous consequences for Yasmeen.

After discovering that Geoff is selling their share of Speed Daal so that he and Yasmeen can move abroad, Alya is shocked at the thought of her gran moving so far away.

While Geoff is loving the control he has got over his wife, it’s clear that Yasmeen doesn’t want to be away from her family, but she puts on a brave face to keep Geoff happy.

Alya is horrified by the situation and tries to make Yasmeen see that Geoff is controlling her.

Soon she is grabbing a bag and shoving her gran’s clothes into it, begging her to leave her abusive husband.

With Yasmeen refusing to listen, Alya takes drastic action and heads to the police station to report her gran’s husband.

But her actions have “dangerous consequences” for Yasmeen, reveals actress Sair Khan.

In an interview with Metro.co.uk, she revealed her plan to help her gran backfires and actually puts her in danger.

She explained that Alya “has always had an uneasy feeling about Geoff” even before she realised there was abuse going on.

The actress revealed how Yasmeen and Geoff’s shock wedding was a “massive turning point”.

She continued: “She isn’t necessarily making the leap to thinking there is an abusive relationship going on. She just knows that something is not quite right.”

When Alya discovers that her already isolated gran is planning on moving to Cyprus with Geoff, she knows she can’t let that happen because Geoff would have even more control over her.

After speaking to Toyah, who has knowledge of abuse victims because of her job, Alya hatches a plan.

Sair added: “She can’t go to the police and say that she doesn’t like her gran’s boyfriend. But, because she has seen a worrying pattern of behaviour, Toyah tells her there is information that she can request to see if she can prove he has a history of abuse in any form.

“She is not scared about her own safety but she needs to be careful not to do something which puts Yasmeen in more danger.

“She feels she has tried the softly softly tactic but she now believes she has to do the right thing and swoop in and be the hero and look after Yasmeen.

“That backfires quite dramatically with potential dangerous consequences for Yasmeen, because she is so under Geoff’s spell that something like this could do a lot of damage.”