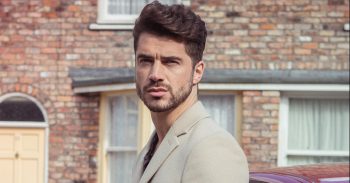 The hunky lawyer is back and he's made a new friend

The hunky lawyer left Weatherfield in February to go travelling after making a pass at Sarah Platt and realising his womanising ways were turning him into someone he wasn’t.

But now actor Sam Robertson has resumed filming for the soap.

In a Saturday Sneak Peek post on Twitter, one of Adam’s comeback scenes has been revealed and he’s made a new friend on the cobbles.

He can be seen playing table football with Dr Ali Neeson and the pair could make for some interesting friends – unless Adam is up to his old tricks again.

When he returned to the cobbles in 2017, Adam was hellbent on getting his dad Mike Baldwin’s old business back after being cheated out of his share.

The Connors snatched it from under him and he wanted it back, going to extraordinary lengths to win control of it in a fierce battle between him, Aidan and Johnny Connor.

He was forced to sign over his rights to the factory by the pair when they tricked Adam into breaking into the office to steal confidential documents.

But that humiliation forced Adam into increasingly darker revenge and he teamed up with Aidan’s fiance Eva Price to take the factory from them by having it burgled and the lead roof removed.

It pushed the Connors to breaking point, and Aidan was plunged into a deep depression over the entire situation.

He later took his own life in tragic scenes.

But with Adam now cozying up to Ali, who is Michelle Connor’s son, could he be plotting further revenge on the family?

Or has his time travelling the world changed him for the better?

Adam’s return is set to air in June so viewers won’t have long to wait until they find out.

What do you think Adam is up to? Leave us a comment on our Facebook page @EntertainmentDailyFix and let us know what you think!