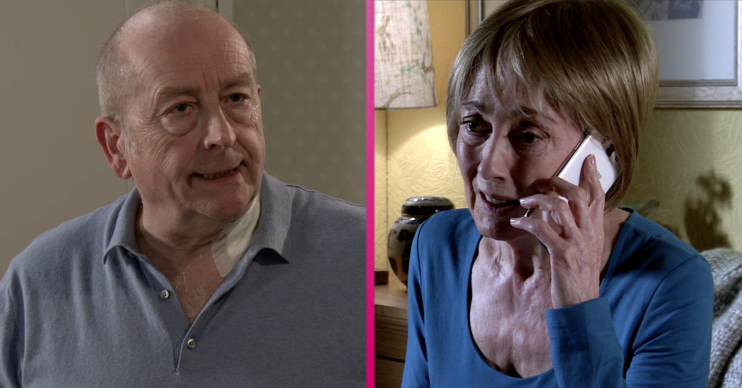 Coronation Street actress Paula Wilcox, who plays Elaine, has hinted Geoff will get worse before his storyline comes to an end.

But the Mount Pleasant star has revealed that viewers may not have seen the worst of the hospital radio DJ.

Speaking to Entertainment Daily and other media at a virtual press event, Paula divulged what she has learnt about Elaine’s background.

She said: “I think what I basically learnt was that she had been married to Geoff, she was Tim’s mother and she had been shut out from their lives by Geoff for nearly 50 years. So she hadn’t seen Tim since he was a baby.

“But she was absolutely devoted to her baby, there’s no doubt about that. But Geoff became so so scary. I think maybe, we haven’t seen how scary he can be up to now. Although it’s pretty frightening and it’s very real, I think, what he’s doing and what he’s doing to her [Yasmeen].

I think maybe, we haven’t seen how scary he can be up to now.

Why did Elaine leave Tim with Geoff?

Paula also spoke about Elaine’s decision to leave her son Tim with Geoff, when she fled her abusive husband

She continued: “But I think that for Elaine it was absolutely terrifying to have a baby in danger as well as yourself in danger and I think what happened in the end was that it was basically you save yourself and because I think Geoff had a son and maybe seemed fond of the son, but not very fond of the wife, she felt that you know, the best was way was to leave the baby and comparative safety and at least save herself.

“Because I think she did feel she was in mortal danger. And so she got out and I suspect that for about I don’t know, 20 years, 10 years, whatever, she buried it and tried not to think about it and tried to make a new life.

“And then I suspect that gradually in time these things have to be dealt with, she got some help, either form her doctor or from a psychotherapist or from group therapy or something.”