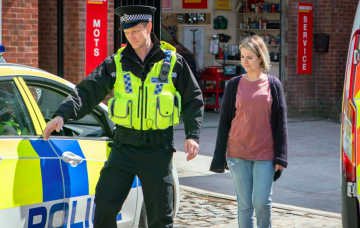 Coronation Street: Abi’s arrested after being stitched up by Tracy

Tracy returns from honeymoon and promptly stabs Abi in the back

Abi Franklin is in big trouble next week when the police question her about Michelle Connor’s car.

As fans know Tracy Barlow was the one who tampered with the car after thinking that her husband Steve McDonald had been having an affair.

Tracy returns from honeymoon and reveals she’s abandoned Steve there in the desert, but she’s soon brought back to Earth when Shona talks about the car crash.

The florist is even more horrified when the police arrive to talk to Abi and lead her away for questioning.

Sneakily Tracy comes up with a plan and slyly pockets Abi’s wallet and keys.

Later, Abi leads the police over to the garage where she plans to show them CCTV from the day of the crash.

But she’s horrified when she realises the laptop with the footage on has been stolen from the garage.

Tracy feels terrible as Abi is taken in where the police suggest she was working with Ronan and tampered with Michelle’s car in return for drugs.

It was reported last week that Abi was looking at a Christmas behind bars thanks to her so-called friend Tracy.

A source told The Sun Online: “Abi has worked really hard to turn her life around but this could undo all that.

“She’s going to end up behind bars for a crime she didn’t commit and no-one’s going to believe that she isn’t responsible.”

The source added: “Tracy is the only one who will be able to save Abi but she’s Tracy Barlow so how likely is that?

It’s set to be an interesting time for Abi behind bars at Christmas but at least she will have a familiar face behind bars with Sally Metcalfe still there for her.

Tracy damaged Michelle’s car in an attempt to get Abi sacked from the garage when she thought she was having an affair with Steve McDonald.

The damage saw Michelle’s car fail when she was being pursued by drug dealer Ronan.

Spiralling events meant if Tracy hadn’t damaged the car then Ryan Connor wouldn’t have been run over.

Likewise, Leanne Battersby wouldn’t be in hospital fighting for her life.

And Ali Neeson wouldn’t have murdered Ronan while trying to protect his family.

It’s not the first death Tracy has caused, either directly or inadvertently.

In 2007 she murdered Charlie Stubbs in cold blood, and in 2015 she accidentally killed Kal Nazir and Maddie Heath in a fire.

And for now it seems that Abi is her next victim.

Read more:  First look at next week’s Corrie in pictures

Unless Tracy decides to fess up and save her?

Should Tracy admit the truth? Leave us a comment on our Facebook page @EntertainmentDailyFix and let us know what you think!